Blend two or three metals together and you get an alloy that usually looks and acts like a metal, with its atoms arranged in rigid geometric patterns.

But once in a while, under just the right conditions, you get something entirely new: a futuristic alloy called metallic glass that's amorphous, with its atoms arranged every which way, much like the atoms of the glass in a window. Its glassy nature makes it stronger and lighter than today's best steel, plus it stands up better to corrosion and wear.

Even though metallic glass shows a lot of promise as a protective coating and alternative to steel, only a few thousand of the millions of possible combinations of ingredients have been evaluated over the past 50 years, and only a handful developed to the point that they may become useful.

Now a group led by scientists at the Department of Energy's SLAC National Accelerator Laboratory, the National Institute of Standards and Technology (NIST) and Northwestern University has reported a shortcut for discovering and improving metallic glass -- and, by extension, other elusive materials -- at a fraction of the time and cost.

The research group took advantage of a system at SLAC's Stanford Synchrotron Radiation Lightsource (SSRL) that combines machine learning -- a form of artificial intelligence where computer algorithms glean knowledge from enormous amounts of data -- with experiments that quickly make and screen hundreds of sample materials at a time. This allowed the team to discover three new blends of ingredients that form metallic glass, and to do this 200 times faster than it could be done before, they reported today in Science Advances.

"It typically takes a decade or two to get a material from discovery to commercial use," said Northwestern Professor Chris Wolverton, an early pioneer in using computation and AI to predict new materials and a co-author of the paper. "This is a big step in trying to squeeze that time down. You could start out with nothing more than a list of properties you want in a material and, using AI, quickly narrow the huge field of potential materials to a few good candidates."

The ultimate goal, he said, is to get to the point where a scientist could scan hundreds of sample materials, get almost immediate feedback from machine learning models and have another set of samples ready to test the next day -- or even within the hour.

Over the past half century, scientists have investigated about 6,000 combinations of ingredients that form metallic glass, added paper co-author Apurva Mehta, a staff scientist at SSRL: "We were able to make and screen 20,000 in a single year."

While other groups have used machine learning to come up with predictions about where different kinds of metallic glass can be found, Mehta said, "The unique thing we have done is to rapidly verify our predictions with experimental measurements and then repeatedly cycle the results back into the next round of machine learning and experiments."

There's plenty of room to make the process even speedier, he added, and eventually automate it to take people out of the loop altogether so scientists can concentrate on other aspects of their work that require human intuition and creativity. "This will have an impact not just on synchrotron users, but on the whole materials science and chemistry community," Mehta said.

The team said the method will be useful in all kinds of experiments, especially in searches for materials like metallic glass and catalysts whose performance is strongly influenced by the way they're manufactured, and those where scientists don't have theories to guide their search. With machine learning, no previous understanding is needed. The algorithms make connections and draw conclusions on their own, and this can steer research in unexpected directions.

"One of the more exciting aspects of this is that we can make predictions so quickly and turn experiments around so rapidly that we can afford to investigate materials that don't follow our normal rules of thumb about whether a material will form a glass or not," said paper co-author Jason Hattrick-Simpers, a materials research engineer at NIST. "AI is going to shift the landscape of how materials science is done, and this is the first step."

The paper is the first scientific result associated with a DOE-funded pilot project where SLAC is working with a Silicon Valley AI company, Citrine Informatics, to transform the way new materials are discovered and make the tools for doing that available to scientists everywhere.

Founded by former graduate students from Stanford and Northwestern universities, Citrine has created a materials science data platform where data that had been locked away in published papers, spreadsheets and lab notebooks is stored in a consistent format so it can be analyzed with AI specifically designed for materials.

"We want to take materials and chemical data and use them effectively to design new materials and optimize manufacturing," said Greg Mulholland, founder and CEO of the company. "This is the power of artificial intelligence: As scientists generate more data, it learns alongside them, bringing hidden trends to the surface and allowing scientists to identify high-performance materials much faster and more effectively than relying on traditional, purely human-driven materials development."

Until recently, thinking up, making and assessing new materials was painfully slow. For instance, the authors of the metallic glass paper calculated that even if you could cook up and examine five potential types of metallic glass a day, every day of the year, it would take more than a thousand years to plow through every possible combination of metals. When they do discover a metallic glass, researchers struggle to overcome problems that hold these materials back. Some have toxic or expensive ingredients, and all of them share glass's brittle, shatter-prone nature.

Over the past decade, scientists at SSRL and elsewhere have developed ways to automate experiments so they can create and study more novel materials in less time. Today, some SSRL users can get a preliminary analysis of their data almost as soon as it comes out with AI software developed by SSRL in conjunction with Citrine and the CAMERA project at DOE's Lawrence Berkeley National Laboratory.

"With these automated systems we can analyze more than 2,000 samples per day," said Fang Ren, the paper's lead author, who developed algorithms to analyze data on the fly and coordinated their integration into the system while a postdoctoral scholar at SLAC.

In the metallic glass study, the research team investigated thousands of alloys that each contain three cheap, nontoxic metals.

They started with a trove of materials data dating back more than 50 years, including the results of 6,000 experiments that searched for metallic glass. The team combed through the data with advanced machine learning algorithms developed by Wolverton and graduate student Logan Ward at Northwestern.

Based on what the algorithms learned in this first round, the scientists crafted two sets of sample alloys using two different methods, allowing them to test how manufacturing methods affect whether an alloy morphs into a glass.

Both sets of alloys were scanned by an SSRL X-ray beam, the data fed into the Citrine database, and new machine learning results generated, which were used to prepare new samples that underwent another round of scanning and machine learning.

SSRL is a DOE Office of Science user facility. In addition to SLAC, NIST and Northwestern, scientists contributing to this study came from the University of Chicago's Computation Institute, the University of South Carolina and the University of New South Wales in Australia. The SLAC pilot project with Citrine is funded by the Advanced Manufacturing Office of DOE's Office of Energy Efficiency and Renewable Energy, and includes collaborating scientists from NIST, DOE's National Renewable Energy Laboratory and the Colorado School of Mines. The CAMERA project at Berkeley Lab is supported by the DOE Office of Science.

SLAC National Accelerator Laboratory is supported by the Office of Science of the U.S. Department of Energy. The Office of Science is the single largest supporter of basic research in the physical sciences in the United States, and is working to address some of the most pressing challenges of our time.

Scientists use machine learning to speed discovery of metallic glass 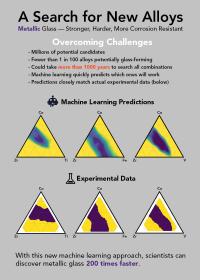 A Search for New Alloys -- Infographic