The BBVA Foundation Frontiers of Knowledge Award in Economics, Finance and Management has gone in this twelfth edition to Philippe Aghion and Peter Howitt "for fundamental contributions to the study of innovation, technical change, and competition policy," in the words of the award citation.

The committee, which met remotely due the restrictions imposed by the COVID-19 pandemic, elected to share the award between the two economists who, it said, "have revived, developed in the framework of modern economic theory and validated empirically Schumpeter's idea that productivity growth at the macroeconomic level stems from a process of creative destruction."

This idea of creative destruction was popularized by the Austrian economist Joseph Schumpeter in the early 1940s. It holds that productivity growth at the macro level is the result of a process whereby the firms best able to adapt and develop new technologies will drive out competitors that lag behind in productivity. The result is a ceaseless movement with the most productive players displacing their less productive counterparts.

The new laureates began collaborating in 1987, not long after Aghion joined the staff at MIT. There he met Peter Howitt, at the time a visiting professor. "It was Olivier Blanchard, a Professor of Economics, who introduced us to each other - Howitt recalls - and suggested we might want to collaborate, as we had some ideas in common. He was quite right, I think, because we hit it off immediately and began to work on theories of economic growth. And we have been doing so ever since."

"At the time we would talk in class about Schumpeter's idea that innovation is important for growth, but we realized that what was lacking was a model," adds Philippe Aghion. And here the French researcher's specialization in applied microeconomic theory found its ideal complement in the macro analysis that was the Canadian's terrain.

"I am very excited to share this award with Peter Howitt for developing what is now known as the Schumpeterian growth theory, which is a new way to look at growth economics," said Aghion after hearing of the award. Professor Howitt expressed a similar enthusiasm about sharing the distinction with his colleague: "The work I've done with Philippe is the most important of my career. We've been collaborating for 33 years now, so it's taken up a very big part of my professional career. Now to share such an important award with him; I just couldn't be happier."

At the start of the 1980s, the so-called neo-classical models explaining economic growth mostly confined themselves to the accumulation of physical capital. Technological change was an external factor that was simply left out of the equation.

The early 1990s, however, saw the popularization of endogenous growth models whereby a country's growth was considered to be a product of its own system of economic and institutional organization. The first endogenous models were not explicit about how these arrangements were meant to feed into growth, and simply assumed that technology exhibits constant returns to scale.

The Aghion-Howitt model supplied the missing link, identifying it as the creative destruction produced by innovation at the microeconomic level. According to Professor Aghion, Chair of the Economics of Institutions, Innovation and Growth at the Collège de France in Paris, it relies on three basic ideas. "The first is that innovation is the engine of long-term growth. To grow, you need innovation that builds upon previous innovation. The second is that innovation doesn't come from heaven, but from entrepreneurs who pursue it. And the third is creative destruction, the fact that new technology displaces old technology. And that is very important, because it means that growth is a process of conflict between the old and the new."

In this process, Professor Howitt expands, there are losers as well as winners: "New technologies not only generate lots of benefits, they also render old technologies obsolete along with the knowledge and skills of the human capital employed. This creates a conflict between the status quo and the entrepreneurs bringing new ideas into the marketplace. One that has to be resolved somehow, so society can enjoy the fruits of economic growth."

The Aghion-Howitt model reflects the convergence of the two economists' specializations. "My work," Aghion explains, "was much more on the micro side, but I thought that answers could be found by putting micro into macro." This led him naturally to Howitt, an expert in macroeconomic analysis. "Peter and I decided to harmonize our approaches to expand on Schumpeter's ideas. We were a good fit together and that is how the model came about. The complementarity between macro and micro was what allowed us to progress." The key, they felt, was to build a growth theory that puts firms and market structure "at the heart of the growth process." And the way to proceed, as Aghion relates, was "to arrive at a theory which 'operationalizes' Schumpeter's notion of creative destruction - the process by which new innovations replace older technologies."

They decided to pursue this goal via a two-way approach: developing models based on creative destruction that shed new light on several aspects of the growth process; and "establishing a continuous dialogue between theory and empirical research, with the purpose of using rich micro data to confront the predictions that distinguish our theory from other growth theories." The result, Aghion believes, "has improved our understanding of the underlying sources of growth."

"Our thinking," continues Howitt, "was influenced by the econometric research taking place in the 1980s which showed that short-run macroeconomic shocks tend to have long-run effects. This means that at least some of the technological change that sustains long-run growth arises from shocks that disturb economic activity in the short run. Creative destruction is a process that produces just this kind of result, and we were able to incorporate the process into a macroeconomic growth model by adapting the micro models developed by Jean Tirole."

In 1992, their work appeared in a joint paper in Econometrica titled "A Model of Growth through Creative Destruction," providing a new economic framework which, the committee says, "is the basis for important positive and normative new insights, and identifies policies that can increase or decrease innovation and growth."

A rich variety of applications

This "neo-Schumpeterian" framework, as it is generally referred to, quickly proved itself to be a powerful tool for a wide variety of applications, some of them developed by the authors themselves.

Working collaboratively, for instance, they have identified effective policies to foster innovation-led growth. These include subsidies to basic research, education, health, infrastructure, and a balanced tax policy; property right protection to safeguard innovators against imitators; and competition policies which ensure that incumbent firms cannot bar the entry of new innovators. They also emphasize the importance of insurance and protection policies: "We need a government," says Aghion, "which protects firms and employees against shocks like the 2008 crisis, so that R&D investments and innovation survive those major setbacks."

Howitt adds his own reflections: "Which policies are best depends very much on a country's specific situation, and especially on the level of development. In particular, strong protection of intellectual property rights is less important for countries that are struggling to catch up to the global technology frontier, who rely on copying or adapting existing technologies, than it is for leading countries that need to maintain incentives for frontier innovations."

Asked about their work on the role of institutions in economic development, Aghion considers that "it has shown the importance of having, on the one hand, good intellectual property right protection for new innovations, to guarantee that innovation rents will not be dissipated and, on the other, effective competition policy, to make sure that incumbent firms (the innovators of yesterday) are not using their rents to prevent subsequent innovations and the entry of new players."

In another major paper published in 2005 dealing with competition and innovation, they found that the relationship between these two parameters had an inverted-U or hump shape, with both very high and very low competition deterring innovation. "It also shows," remarks the French economist, "that innovation and productivity growth reacts more positively to increased product market competition in more frontier firms, whereas innovation may react negatively to competition in less advanced firms."

Philippe Aghion (Paris, France, 1956) earned a first degree in the Mathematics Section of the Ecole Normale Supérieure de Cachan (1980). He continued his training in Mathematical Economics in Paris then completed a PhD in Economics at Harvard University (1987). He next taught for two years at the Massachusetts Institute of Technology, before returning to Europe, where he worked for ten years at the European Bank for Reconstruction and Development in London, as Deputy Chief Economist (1990-1992) and latterly as Research Coordinator (1992-2000). In this period he was also made an Official Fellow at the University of Oxford's Nuffield College. Professor of Economics at University College London from 1996 to 2002, in 2000 he joined the faculty at Harvard and two years later was appointed Robert C. Waggoner Professor of Economics. In 2015 he again returned to Europe, to the Collège de France in Paris, where he holds the Chair in the Economics of Institutions, Innovation and Growth. That same year he was named Centennial Professor of Economics at the London School of Economics. From 2018-2020 he has also visited the Department of Economics at Harvard. Author of over a hundred published papers and twelve books, he is a former president of both the French Economics Association and the European Economic Association. He is a Fellow of the Econometric Society and has served on the editorial boards of journals including Econometrica, Review of Economic Studies and Review of Economics and Statistics.

Peter Howitt (Canada, 1946) is Professor Emeritus of Economics at Brown University (United States), where he is also Lyn Crost Professor Emeritus of Social Sciences. He earned a BA in Economics at McGill University in 1968, and an MA in Economics the following year at the University of Western Ontario, before moving to the States to complete a PhD at Northwestern University (1973). From 1981 to 1996 he taught at the University of Western Ontario, combining his work there with visiting positions in France (Laval, Paris and Toulouse universities) and at the Massachusetts Institute of Technology. In 1996 Howitt moved to Ohio State University (United States) as a university chaired professor, before joining the faculty at Brown University in 2000. He has held editorial positions with many leading economics journals, and been granted several honorary doctorates.

The BBVA Foundation Frontiers of Knowledge Awards, established in 2008, recognize and reward contributions of singular impact in diverse fields of science, technology, social sciences and the humanities that have demonstrably expanded the frontiers of the known world, opening up new paradigms and knowledge fields. Their eight categories are reflective of the knowledge map of the 21st century, encompassing basic research in Physics, Chemistry and Mathematics, Biology and Biomedicine, Information and Communication Technologies, Humanities and Social Sciences, Economics, Finance and Management, Ecology and Conservation Biology, Climate Change, and, within the arts, the supremely creative realm of music. The BBVA Foundation is aided in the evaluation process by the Spanish National Research Council (CSIC), the country's premier public research organization. The Foundation and CSIC jointly appoint the evaluation support panels charged with undertaking an initial assessment of the candidates proposed by numerous institutions across the world and drawing up a reasoned shortlist for the consideration of the award committees. CSIC is also responsible for designating the chair of each committee, formed by eminent authorities in the subject area. 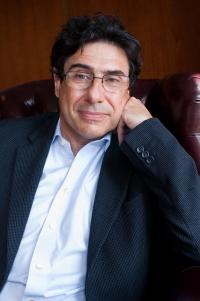 Philippe Aghion, winner of the Frontiers of Knowledge Award in Economics.