"Recent developments in optogenetics, patterned optical stimulation, and high-speed optical detection enable simultaneous stimulation and recording of thousands of living neurons,” says Xiaochen Guo, an assistant professor of electrical and computer engineering at Lehigh University and principal investigator on the project. "And scientists already know that connected biological living neurons naturally exhibit the ability to perform computations and to learn. With support from NSF, we will be building an experimental testbed that will enable optical stimulation and detection of the activity in a living network of neurons, and we'll develop algorithms to train it.”

In the research, images of handwritten digits will be encoded into what are called "spike train stimuli,” similar to a two-dimensional bar code. The encoding of the spike train will then be optically applied to a group of networked in vitro neurons with optogenetic labels.

"We hope that neuron scientists will be able to use this technology as a testbed for studying the human brain,” says Berdichevsky, who's previous research has delved into the causes and solutions of epilepsy and other diseases.

"This research will study how to stabilize the living neural network such that a Spike Time Dependent Plasticity (STDP)-based programming protocol can imprint the desired synaptic strengths onto a living neural network,” says Yan. "Our team will also investigate how to strategically design and apply an STDP-based protocol to maximize programming throughput and optimize the convergence rate of the network states. And on the algorithm side, the proposed research will study data representation and training algorithms that take into account various constraints of the wetware system we are designing." 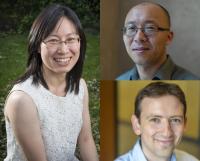