EAST LANSING, Mich. -- Known to science only by two specimens described in 1900, a critically endangered crow has re-emerged on a remote, mountainous Indonesian island thanks in part to a Michigan State University scientist.

The Banggai Crow was believed by many to be extinct until Indonesian biologists finally secured two new specimens on Peleng Island in 2007. Pamela Rasmussen, an MSU assistant professor of zoology and renowned species sleuth, provided conclusive verification.

An ornithologist who specializes on the birds of southern Asia, Rasmussen studied the two century-old specimens known as Corvus unicolor in New York's American Museum of Natural History. She compared them to the new crow specimens in Indonesia's national museum, to lay to rest speculation that they were merely a subspecies of a different crow. The more common Slender-billed Crow, or Corvus enca, also is found in the Banggai Islands, and likewise is all black.

"The morphometric analysis I did shows that all four unicolor specimens are very similar to each other, and distinctly different from enca specimens. We also showed that the two taxa differ in eye color -- an important feature in Corvus," Rasmussen said. "Not only did this confirm the identity of the new specimens but also the specific distinctness of Corvus unicolor, which has long been in doubt."

The rediscovery was spearheaded by professor Mochamad Indrawan of the University of Indonesia, chairperson of the Indonesian Ornithologists' Union, who conducted ecological field studies. He was assisted by collaborator Yunus Masala and by the Celebes Bird Club, members of which secured the new specimens that are now catalogued at the Museum Zoologicum Bogoriense in Java.

Before Indrawan and collaborators could publish their findings confirming the crow's identity, other birdwatchers in the mountains of Peleng photographed and recorded Banggai Crows, which Rasmussen said confirms the distinctiveness of the species.

Indrawan and Masala now have turned their efforts toward protecting the rare species, which is hunted by local residents. That includes making recommendations for protection of its forest habitat through sustainable agriculture methods and, perhaps, eco-tourism, to address the residents' livelihood needs.

A photo of the Banggai Crow debuts this week in volume 14 of the influential Handbook of the Birds of the World. In the meantime, Rasmussen, Indrawan and colleagues have submitted the detailed paper confirming the species' rediscovery for publication.

Rasmussen's visit to Indonesia to take specimen measurements and make comparisons was made possible through a planning visit for a MSU Study Abroad program to Malaysia and Indonesia.

Rasmussen, who also is assistant curator of mammalogy and ornithology at the MSU Museum, is the author of the two-volume Birds of South Asia: The Ripley Guide. Her work on uncovering the ornithological frauds of British collector Col. Richard Meinertzhagen won international attention, detailed in Nature, the May 2006 The New Yorker, and The Best American Science and Nature Writing 2007.

For MSU news on the Web, go to news.msu.edu. 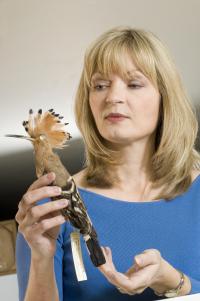 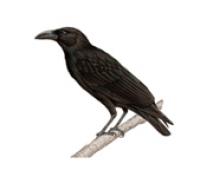