In a new study of human ear tissues, hearing scientists have demonstrated that age-related hearing loss, also called presbycusis, is mainly caused by damage to hair cells, the sensory cells in the inner ear that transform sound-induced vibrations into the electrical signals that are relayed to the brain by the auditory nerve. Their research challenges the prevailing view of the last 60 years that age-related hearing loss is mainly driven by damage to the stria vascularis, the cellular "battery" that powers the hair cell's mechanical-to-electrical signal conversion.

The inner ear, where most types of hearing impairment originate, cannot be biopsied, and its delicate structures can only be resolved in specimens removed at autopsy. Understanding the true cellular causes of age-related hearing loss impacts how future treatments are developed and how appropriate candidates will be identified, and can also suggest how to prevent or minimize this most common type of hearing damage, according to the study authors, led by Pei-zhe Wu, MD, a postdoctoral research fellow in Otolaryngology Head and Neck Surgery in the Eaton-Peabody Laboratories at Massachusetts Eye and Ear.

"Our study upends the dogma about the major cause of age-related hearing loss," said Dr. Wu. "Documenting the dominant role of progressive hair cell loss in the hearing impairment of normal aging means that the millions who suffer with this condition could benefit from the hair cell regenerative therapies that are the focus of ongoing research across the world. No one is focusing on approaches to regenerate the stria."

The new study was published online July 20, in Journal of Neuroscience (JNeurosci).

Researchers examined 120 inner ears collected at autopsy. They used multivariable statistical regression to compare data on the survival of hair cells, nerve fibers, and the stria vascularis with the patients' audiograms to uncover the main predictor of the hearing loss in this aging population. They found that the degree and location of hair cell death predicted the severity and pattern of the hearing loss, while stria vascularis damage did not.

Previous studies examined fewer ears, rarely attempted to combine data across cases and typically applied less quantitative approaches. Most importantly, prior studies greatly underestimated the loss of hair cells, because they didn't use the state-of-the art microscopy techniques that allowed Wu and colleagues to see the tiny bundles of sensory hairs (> 200 times thinner than a typical human hair), that helped them identify and count the small number surviving hair cells. Prior studies scored hair cells as "present," even if only one or two remained.

Age-related hearing loss is one of the most common conditions affecting older adults; about one in three people in the United States between the ages of 65 and 74 has hearing loss, and nearly half of those 75 and older. The condition cannot be reversed and often requires hearing aids or other sound amplification devices.

Previous animal studies suggested that presbycusis is caused by atrophy of the stria vascularis, a highly vascularized cluster of ion-pumping cells, located in the inner ear adjacent to the hair cells. The stria serves as a "battery" that powers the hair cells as they transform sound-evoked mechanical motions into electrical signals. In aging laboratory animals, such as gerbil, there is very little loss of hair cells, compared to humans, even at the end of life. However, there is prominent damage to the stria vascularis, and damage to the stria will, indeed, cause hearing loss. Prior to this new study, most scientists have assumed that the aging gerbil data also apply to human presbycusis.

The researchers say the new findings are good news given recent progress in the development of therapies to regenerate missing hair cells. If presbycusis were due primarily to strial damage, hair cell regeneration therapy would not be effective. This new study turns the tables, suggesting, that vast numbers of hearing impaired elderly patients could likely benefit from these new therapies as they come to the clinics, hopefully within the next decade.

Findings point to importance of protecting ears from sound damage

The data also showed that hair cell degeneration in aging humans is dramatically worse than in animal models of presbycusis. Laboratory animals are aged in sound-controlled enclosures, where they are not exposed to the constant barrage of moderate and high-intensity noises that surround us: those we choose to listen to and those we can't avoid. "The greater hair cell death in human ears suggests that the high-frequency hearing losses that define presbycusis may be avoidable, reflecting mainly accumulated damage from environmental noise exposures," said M. Charles Liberman, PhD, Director, of the Eaton-Peabody Laboratories at Mass Eye and Ear and a co-author of the study. "It's likely that if we were more careful about protecting our ears during prolonged noisy activities, or completely avoiding them, we could all hear better into old age" said Dr. Liberman, who is the Harold F. Schuknecht Professor of Otolaryngology-Head and Neck Surgery at Harvard Medical School.

In addition to Drs. Wu and Liberman, co-authors of the study are Jennifer T. O'Malley of Mass. Eye and Ear and Harvard Medical School's Department of Otolaryngology-Head and Neck Surgery, and Victor de Gruttola of the Department of Biostatistics at the Harvard T.H. Chan School of Public Health. 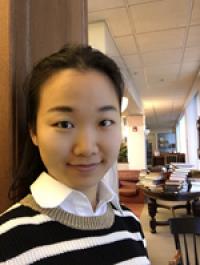