Microscopic analysis of scratches on dinosaur teeth has helped scientists unravel an ancient riddle of what a major group of dinosaurs ate- and exactly how they did it!

Now for the first time, a study led by the University of Leicester, has found evidence that the duck-billed dinosaurs- the Hadrosaurs- in fact had a unique way of eating, unlike any living creature today.

Working with researchers from the Natural History Museum, the study uses a new approach to analyse the feeding mechanisms of dinosaurs and understand their place in the ecosystems of tens of millions of years ago. The results are published today in the Proceedings of the National Academy of Sciences.

Palaeontologist Mark Purnell of the University of Leicester Department of Geology, who led the research, said: "For millions of years, until their extinction at the end of the Cretaceous, duck-billed dinosaurs – or hadrosaurs - were the World's dominant herbivores. They must have been able to break down their food somehow, but without the complex jaw joint of mammals they would not have been able to chew in the same way, and it is difficult to work out how they ate. It is also unclear what they ate: they might have been grazers, cropping vegetation close to the ground - like today's cows and sheep - or browsers, eating leaves and twigs - more like deer or giraffes. Not knowing the answers to these questions makes it difficult to understand Late Cretaceous ecosystems and how they were affected during the major extinction event 65 million years ago.

"Our study uses a new approach based on analysis of the microscopic scratches that formed on hadrosaur's teeth as they fed, tens of millions of years ago. The scratches have been preserved intact since the animals died. They can tell us precisely how hadrosaur jaws moved, and the kind of food these huge herbivores ate, but nobody has tried to analyse them before."

The researchers say that the scratches reveal that the movements of hadrosaur teeth were complex and involved up and down, sideways and front to back motion. According to Paul Barrett palaeontologist at the Natural History Museum "this shows that hadrosaurs did chew, but in a completely different way to anything alive today. Rather than a flexible lower jaw joint, they had a hinge between the upper jaws and the rest of the skull. As they bit down on their food the upper jaws were forced outwards, flexing along this hinge so that the tooth surfaces slid sideways across each other, grinding and shredding food in the process".

The scratch patterns provide confirmation of a theory of hadrosaur chewing first proposed 25 years ago, and provides new insights into their ecology, say the researchers.

The research also sheds light on what the dinosaurs ate. Vince Williams of the University of Leicester said: "Although the first grasses had evolved by the Late Cretaceous they were not common and it is most unlikely that grasses formed a major component of hadrosaur diets. We can tell from the scratches that the hadrosaur's food either contained small particles of grit, normal for vegetation cropped close to the ground, or, like grass, contained microscopic granules of silica. We know that horsetails were a common plant at the time and have this characteristic; they may well have been an important food for hadrosaurs".

One of the big surprises of this study is that so much information about such large animals can be gleaned from such a tiny patch of tooth. "By looking at the pattern of scratches in an area that is only about as wide as a couple of human hairs we can work out how and what these huge herbivores were eating" notes Williams. "And because we can analyse single teeth, rather than whole skeletons, the technique has the potential to tell us a lot more about dinosaur feeding and the ecosystems in which they lived."

2. The paper "Quantitative analysis of dental microwear in hadrosaurid dinosaurs, and the implications for hypotheses of jaw mechanics and feeding" by Vincent S. Williams, Paul M. Barrett and Mark A. Purnell is published in the Proceedings of the National Academy of Sciences (online Early Edition).

3. Vince Williams and Mark Purnell are at the University of Leicester, UK; Paul Barrett is at the Natural History Museum, London, UK. A pdf of the paper is available from Mark Purnell: map2@le.ac.uk

4. Winner of Visit London's 2008 Kids Love London Best Family Fun Award, the Natural History Museum is also a world-leading science research centre. Through its collections and scientific expertise, the Museum is helping to conserve the extraordinary richness and diversity of the natural world with groundbreaking projects in 68 countries

6. Following images can be obtained from University of Leicester pressoffice@le.ac.uk

Hadrosaur fact file
This study is based on Edmontosaurus: Lived USA and Canada 65-68 million years ago; Length up to 13 m, weight up to 3 tonnes; One of the most abundant dinosaurs of its time; Known from many complete skeletons, including several mummies with skin impressions and gut contents preserved.

Teeth from the Upper Jaw of a Hadrosaur 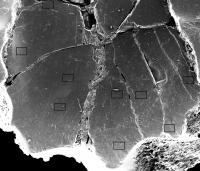