The discovery that dung beetles use the light of the Milky Way to navigate in the world has received much praise. Researchers at Lund University in Sweden have now taken a new step in understanding the existence of these unique beetles: when the beetles dance on top of a ball of dung, they simultaneously take a photograph - a snapshot - of how celestial bodies are positioned.

Then they know where they are going and roll off with their ball of dung in a straight line across the savannah.

"Other animals and insects also use the position of celestial bodies to navigate, but the dung beetles are unique - they are the only ones to take a snapshot where they gather information about how various celestial bodies, such as the sun, moon and stars, are positioned", says Basil el Jundi, researcher at Lund University.

He conducted the study together with colleagues Marie Dacke, Emily Baird, James J. Foster and Lana Khaldy, who all work at the world-leading Lund Vision Group at Lund University. Researchers from South Africa also participated in the study.

By applying the snapshot strategy to orient themselves in the world, the dung beetles use their potential to the fullest, according to Basil el Jundi. They do not use long processes to retrieve information - a single snapshot is sufficient to navigate correctly.

"We are the first to have shown that dung beetles are taking these snapshots. We are also the first to show how they store and use the images inside their tiny brains", he says.

The snapshot is taken when the beetle is dancing, and the image is stored in the brain. When the beetle then starts to roll its ball of dung, it is able to successfully navigate straight ahead by matching the stored snapshot of the sky with the present environment.

The experiments were performed in South Africa at a facility where the dung beetles only had access to an artificial firmament to orient themselves. Because the sky was artificial, the researchers were able to regulate the amount of light, as well as change the positions of the celestial bodies. Put simply, this allowed them to compare how the beetles changed direction depending on the placement of the artificial sun or moon, etc.

Taking snapshots of the firmament is unique to dung beetles. Ants also take snapshots, but of their surroundings on Earth rather than the sky. However, dung beetles are not the only ones that dance, spinning around before taking off. Ants rotate and bees and wasps take a tour of their nest. No one knows why.

"Perhaps they also gather information while rotating or going for a spin in the air, but we don't know", says Basil el Jundi.

According to him, the results of how dung beetles find their way in the world can become significant in the development of navigation systems in driverless vehicles.

The article is published in the scientific journal Current Biology.

Members of the Lund Vision Group at Lund University have previously received praise for their research. A few years ago, Marie Dacke, Eric Warrant and Emily Baird were awarded the so-called IG Nobel Prize, for their discovery that dung beetles use the light of the Milky Way to orient themselves in the world. Only research results where seriousness is combined with laughter, that are entertaining while getting people to think, are considered for the IG Nobel Prize.

Video clips of dung beetles dancing on top of their dung balls by Emily Baird, Lund University. Feel free to embed or use:

When dung beetles dance, they photograph the firmament 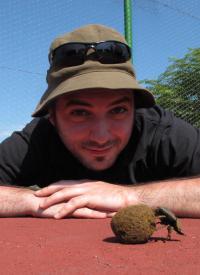