SALT LAKE CITY, Sept. 22, 2014 – After human ancestors controlled fire 400,000 to 1 million years ago, flames not only let them cook food and fend off predators, but also extended their day.

A University of Utah study of Africa's Kalahari Bushmen suggests that stories told over firelight helped human culture and thought evolve by reinforcing social traditions, promoting harmony and equality, and sparking the imagination to envision a broad sense of community, both with distant people and the spirit world.

Researchers previously studied how cooking affected diets and anatomy, but "little is known about how important the extended day was for igniting the embers of culture and society," anthropology professor Polly Wiessner writes in a study published online today in the journal Proceedings of the National Academy of Sciences.

"There is something about fire in the middle of the darkness that bonds, mellows and also excites people. It's intimate," says Wiessner, who has studied the Bushmen for 40 years. "Nighttime around a fire is universally time for bonding, for telling social information, for entertaining, for a lot of shared emotions."

Wiessner's study, which she calls "exploratory," analyzed scores of daytime and firelight conversations among !Kung Bushmen – also known as Ju/'hoansi Bushmen – some 4,000 of which now live in the Kalahari Desert of northeast Namibia and northwest Botswana. (The exclamation, slash and apostrophe symbols represent click sounds in their language.) They are among several groups of Kalahari Bushmen.

Why study the campfire tales of Bushmen?

"We can't tell about the past from the Bushmen," Wiessner says. "But these people live from hunting and gathering. For 99 percent of our evolution, this is how our ancestors lived. What transpires during the firelit night hours by hunter-gatherers? It helps answer the question of what firelit space contributes to human life."

She writes: "Stories are told in virtually all hunter-gatherer societies; together with gifts, they were the original social media."

From the Workaday World to Nights of Bonding and Wonder

In her study, "Embers of Society: Firelight Talk among the Ju/'hoansi Bushmen," Wiessner says archaeological evidence indicates human ancestors had sporadic control of fire 1 million or more years ago, and regularly used it after 400,000 years ago.

"Fire altered our circadian rhythms, the light allowed us to stay awake, and the question is what happened in the fire-lit space? What did it do for human development?" asks Wiessner, who earlier this year was among three University of Utah researchers elected to the National Academy of Sciences.

Wiessner says !Kung Bushmen hold firelight gatherings most nights in groups of up to 15 people. A camp has hearths for each family, but at night people often converge at a single hearth. She analyzed only conversations involving five or more people.

Firelight stories deal with topics such as past hunts, fights over meat, marriage, premarital customs, murder, bush fires, birth, getting lost, interactions with other groups, truck breakdowns, being chased by animals, disputes and extramarital affairs. And there also are traditional myths.

For her study, Wiessner analyzed two sets of data:

But at night, 81 percent of the conversations involved stories, and only 7 percent were complaints, criticism and gossip and 4 percent were economic.

Bonding with People Near and Far – and with the Supernatural

Wiessner found how conversations reinforced major !Kung social institutions and values: arranged marriages, the kinship system, a social structure based on equality, the sharing of food during times of hardship, land rights, trance healing and xaro, a system of exchange that involved pledges of mutual assistance, including housing and food, in troubled times.

"What I found was a big difference between day and night conversation, the kinds of information transmitted and the use of imaginary thought," Wiessner says.

"At night, people really let go, mellow out and seek entertainment. If there have been conflicts in the day, they overcome those and bond. Night conversation has more to do with stories, talking about the characteristics of people who are not present and who are in your broader networks, and thoughts about the spirit world and how it influences the human world. You have singing and dancing, too, which bonds groups."

Healers dance and go into trances, "travel to god's village and communicate with the spirits of deceased loved ones who are trying to take sick people away," Wiessner says.

She says nonhuman primates don't maintain mutually supportive ties outside their group: "We are really unique. We create far-flung ties outside our groups."

Such extended communities allowed humans "to colonize our planet because they had networks of mutual support, which you see expressed today in our capacity for social networking" she adds. "Humans form communities that are not together in space, but are in our heads – virtual communities. They are communities in our heads. For the Bushmen, they may be up to 120 miles away."

Wiessner suggests that firelight stories, conversations, ceremonies and celebrations sparked human imagination and "cognitive capacities to form these imagined communities, whether it's our social networks, all of our relatives on Earth or communities that link us to the spirit world." She says they also bolstered the human ability to "read" what others are thinking – not just their thoughts or intentions, but their views toward other people.

What Has Electricity Done to Us?

Examining how firelight extended the day prompted Wiessner to wonder about modern society, asking, "What happens when economically unproductive firelit time is turned to productive time by artificial lighting?"

Parents read stories or show videos to their children, but now, "work spills into the night. We now sit on laptops in our homes. When you are able to work at night, you suddenly have a conflict: 'I have only 15 minutes to tell my kids a bedtime story. I don't have time to sit around and talk.' Artificial light turned potential social time into potential work time. What happens to social relations?"

Her research raises that question, but doesn't answer it.

Firelight talk of the Kalahari Bushmen 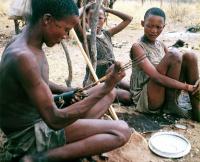 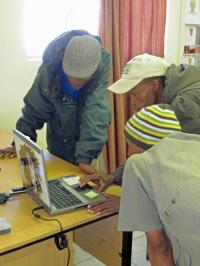