Cambridge, Mass., January 7, 2011 – By rethinking what happens on the surface of things, engineers at Harvard University have discovered that Bacillus subtilis biofilm colonies exhibit an unmatched ability to repel a wide range of liquids—and even vapors.

Centimeters across yet only hundreds of microns thick, such slimy bacterial coatings cling to the surfaces of everything from pipes to teeth and are notoriously resistant to antimicrobial agents. The researchers now suspect they know the secret to a biofilm's resiliency.

Published in the January 5th early edition of the Proceedings of the National Academy of Sciences (PNAS), the study holds promise for both creating bio-inspired non-wetting materials and developing better ways to eliminate harmful biofilms that can clog pipes, contaminate food production and water supply systems, and lead to infections.

"By looking at biofilms from a materials perspective rather than a cellular or biochemical one, we discovered that they have a remarkable ability to resist wetting to an extent never seen before in nature," says lead author Alex Epstein, a graduate student at the Harvard School of Engineering and Applied Sciences (SEAS). "In fact the biofilm literally resisted our initial efforts to study it."

The finding came about serendipitously, as the original intention of the researchers was to study the structure of the biofilm. To image the interior of the biofilm, the team had to soak it with liquids such as ethanol and acetone, which normally spread and seep easily into a surface.

"But to our surprise, it was impossible. The liquids kept beading up on the surface and wouldn't infiltrate the colonies," says Epstein, who is a member of the laboratory of Joanna Aizenberg, Amy Smith Berylson Professor of Materials Science at SEAS; Susan S. and Kenneth L. Wallach Professor at the Radcliffe Institute; and a core member of the Wyss Institute for Biologically Inspired Engineering at Harvard.

As the Aizenberg lab studies materials and wetting, the engineers immediately recognized the significance of what they were observing. It turns out that biofilm has an unprecedented liquid-repellent surface, thereby revealing a critical clue to what may be responsible for its broad antimicrobial resistance.

Nature offers numerous examples of water-resistant surfaces, such as the lotus leaf, a longstanding inspiration for creating synthetic materials. Until now, however, no model natural systems have been found for broadly repellent materials.

While such surfaces can be manufactured, the top-down process is costly, labor intensive, and reliant on toxic chemicals and brittle structures. A biofilm, however, is living proof that only the simplest and most natural of components are required—namely, a resilient meshwork made from proteins and polysaccharides assembled into a multi-scale, hierarchical structure.

At the same time, the finding offers a completely new perspective on how biofilms are immune to so many different types of biocides. Even the most sophisticated biochemical strategy will be ineffective if a biocide cannot enter the slime to reach the bacteria. In short, the antimicrobial activity of alcohols and other solvents becomes compromised by the strongly non-wetting behavior at clinically relevant concentrations.

The team expects that their newfound knowledge will help alert researchers to the need to consider this requirement when designing ways to destroy harmful biofilms.

"Their notorious resistance to a broad range of biocide chemistries has remained a mysterious and pressing problem despite two decades of biofilm research," says Aizenberg, a pioneer in the field of biomimicry. "By looking at it as a macroscopic problem, we found an explanation that was just slightly out of view: antimicrobials can be ineffective simply by being a non-wetting liquid that cannot penetrate into the biofilm and access subsurface cells."

Aizenberg and her colleagues speculate that such strong liquid repellence may have evolved in response to the bacteria's natural soil environment where water can leach heavy metals and other toxins.

Moreover, the property may underlie the recent success of the use of biofilm as an eco-friendly form of biocontrol for agriculture, protecting plant roots from water-borne pathogens.

Looking ahead, the Harvard team plans to investigate precisely how the biochemical components of biofilms give rise to their exceptional resistance and to test the properties of other bacterial species.

"The applications are exciting, but we are equally thrilled that our findings have revealed a previously undocumented phenomenon about biofilms," says Aizenberg. "The research should be an inspiring reminder that we have only scratched the surface of how things really work."

Just as with biofilm, she adds, "It has been a challenge to get deep into the core of the problem."

The research was funded by the BASF Advanced Research Initiative at Harvard University. 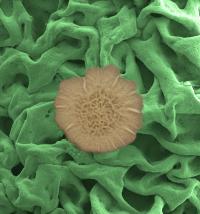