While doing research at the Woods Hole Marine Biological Laboratory in Massachusetts, Sindy Tang learned of a remarkable organism: Stentor coeruleus. It's a single-celled, free-living freshwater organism, shaped like a trumpet and big enough to see with the naked eye. And, to Tang's amazement, if cut in half it can heal itself into two healthy cells.

Tang, who is an assistant professor of mechanical engineering at Stanford University, knew right away that she had to study this incredible ability. "It is one of the Holy Grails of engineering to make self-healing materials and machines," she said. "A single cell is analogous to a spacecraft - both have to figure out how to repair damage without anyone's help from the outside."

But before they could pursue that Holy Grail, Tang and fellow researchers needed a way to efficiently slice the cell in two -- traditional methods take three minutes per cell and they needed hundreds for their experiments. To that end, they developed a new tool that is essentially an assembly line guillotine for cells. This device, detailed in the June 27 issue of the Proceedings of the National Academy of Sciences, pushes a row of cells down a tight channel onto a pointed knife blade, which cuts the cells evenly in half. This guillotine cuts Stentor cells 200 times faster than the previous method with similar survival rates.

In addition to spurring the development of self-healing materials, being able to efficiently study cell healing could eventually help scientists study and treat a variety of human diseases related to cell regeneration, such as cancer and neurodegenerative diseases, said Lucas Blauch, a graduate student in the Tang lab and lead author of the study.

Prior to Tang's cellular guillotine, scientists hoping to study Stentor had to slice the cells by hand under a microscope, using a glass needle.

"Cutting a single cell by hand takes about 3 minutes if you're good at it, and even if you're good at it, you can't always cut the cell equally in half. This method has not changed for over 100 years," said Blauch. "We knew that our lab's expertise in microfluidics would allow us to create a device to do that much faster."

Using the century-old cutting method, it would take a researcher five hours to cut 100 cells, and by the time they were done, the cells they cut first would be well on their way to healing. Tang's guillotine could cut 150 cells in just over 2 minutes, and the cuts were much more standardized and synchronized in the stage of their repair process. They achieved this rate by creating a scaled-up version of their tool with eight identical parallel channels that run simultaneously.

Now, Tang said, her group is ready to study how the cells heal. "From the engineering perspective, we hope to be able to extract basic principles from our studies, and apply them to engineering design to make self-healing materials and machines," she said.

Additional Stanford co-authors include Ya Gai and Jian Wei Khor. Pranidhi Sood and Wallace Marshall of the University of California, San Francisco are also co-authors. Tang is also a member of Stanford Bio-X and fellow of Stanford ChEM-H

This research was funded by the National Science Foundation, the National Institutes of Health and the American Cancer Society. 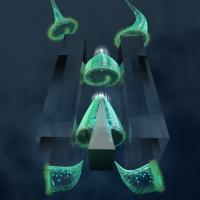