A herd of young birdlike dinosaurs met their death on the muddy margins of a lake some 90 million years ago, according to a team of Chinese and American paleontologists that excavated the site in the Gobi Desert in western Inner Mongolia.

The Sudden sudden death of the herd in a mud trap provides a rare snapshot of social behavior. Composed entirely of juveniles of a single species of ornithomimid dinosaur (Sinornithomimus dongi), the herd suggests that immature individuals were left to fend for themselves when adults were preoccupied with nesting or brooding.

"There were no adults or hatchlings," said Paul Sereno, professor at the University of Chicago and National Geographic Explorer-in-Residence. "These youngsters were roaming around on their own," remarked Tan Lin, from the Department of Land and Resources of Inner Mongolia.

Within an exquisite pair of the skeletons, prepared for display in Sereno's lab and airlifted back to China in late February, preserve stomach stones and the animal's' last meals are preserved.

Sereno, Tan and Zhao Xijin, professor in the Chinese Academy of Sciences, led the 2001 expedition that found the fossils. Team members also included David Varricchio of Montana State University (MSU), Jeffrey Wilson of the University of Michigan and Gabrielle Lyon of Project Exploration. The findings are published in the December 2008 issue of Acta Palaeontologica Polonica, and the work was funded by the National Geographic Society and the David and Lucile Packard Foundation.

"Finding a mired herd is exceedingly rare among living animals," said Varricchio, an assistant professor of paleontology at MSU. "The best examples are from hoofed mammals," such as water buffalo in Australia or feral horses in the American West, he said.

The first bones from the dinosaur herd were spotted by a Chinese geologist in 1978 at the base of a small hill in a desolate, windswept region of the Gobi Desert. Some 20 years later, a Sino-Japanese team excavated the first skeletons, naming the dinosaur Sinornithomimus ("Chinese bird mimic").

Sereno and associates then opened an expansive quarry, following one skeleton after another deep into the base of the hill. In sum, more than 25 individuals were excavated from the site. They range in age from one to seven years, as determined by the annual growth rings in their bones.

The team meticulously recorded the position of all of the bones and the details of the rock layers to try to understand how so many animals of the same species perished in one place. The skeletons showed similar exquisite preservation and were mostly facing the same direction, suggesting that they died together and over a short interval.

The details provided key evidence of an ancient tragedy. Two of the skeletons fell one right over the other. Although most of their skeletons lay on a flat horizontal plane, their hind legs were stuck deeply in the mud below. Only their hip bones were missing, which was likely the handiwork of a scavenger working over the meatiest part of the body bodies shortly after the animals died.

"These animals died a slow death in a mud trap, their flailing only serving to attract a nearby scavenger or predator," Sereno said. Usually, weathering, scavenging or transport of bone have long erased all direct evidence of the cause of death. The site provides some of the best evidence to date of the cause of death of a dinosaur.

Plunging marks in mud surrounding the skeletons recorded their failed attempts to escape. Varricchio said he was both excited and saddened by what the excavation revealed. "I was saddened because I knew how the animals had perished. It was a strange sensation and the only time I had felt that way at a dig," he said.

In addition to herd composition and behavior, the site also provides encyclopedic knowledge of even the tiniest bones in the skull and skeleton. "We even know the size of its eyeball," Sereno said. "Sinornithomimus is destined to become one of the best- understood dinosaurs in the world." 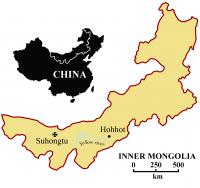