BIRMINGHAM, Ala. - An experimental drug reported in Nature Communications suggests that a "path is clearly achievable" to treat currently untreatable cases of cystic fibrosis disease caused by nonsense mutations. This includes about 11 percent of cystic fibrosis patients, as well as patients with other genetic diseases, including Duchenne muscular dystrophy, β-thalassemia and numerous types of cancers, that are also caused by nonsense mutations.

The drug is a small molecule with a novel mechanism of action, say David Bedwell, Ph.D., and Steven Rowe, M.D., MSPH, co-senior authors. Bedwell is professor and chair of the University of Alabama at Birmingham Department of Biochemistry and Molecular Genetics, and Rowe is a professor in the UAB Department of Medicine.

To understand how a nonsense mutation causes disease -- and how the experimental drug works to suppress the mutation -- requires a close look at the biological machinery that makes proteins inside a cell.

A protein is a chain of hundreds of amino acids that then folds to its proper shape and moves to its proper place to perform its function. The chain is made, link by link, by ribosomes that read a sequence for the protein carried on messenger RNA. That sequence instructs which of the 20 different amino acids to add at each link, one by one.

In the disease cystic fibrosis, mutations affect the protein CFTR that functions at the surface of lung cells to regulate the flow of water to the mucus. A malfunctioning or absent CFTR creates very sticky mucus that allows infections in the lungs. A gene mutation that changes one of the nucleotide bases on the messenger RNA may cause an incorrect amino acid to be placed in the protein chain, altering its function. The nonsense premature termination codons that Bedwell and Rowe study cause a different problem -- the mutation forces the ribosome to stop protein synthesis in mid-course, yielding an incomplete protein. It also causes nonsense-mediated mRNA decay.

Thus, Bedwell, Rowe and colleagues wanted to find small-molecule compounds that would make the ribosome skip through the nonsense premature stop mutation, permitting the ribosome to continue full synthesis of the protein. They hoped to find readthrough agents that have a novel mechanism and function better than current ones, such as aminoglycoside antibiotics, which have poor efficacy.

The researchers used rat cells that carried a modified gene from a deep-sea shrimp to test hundreds of thousands of compounds. The gene encodes NanoLuc luciferase, but with a modification to place a premature termination codon in mid-gene. A small molecule that causes the ribosome to readthrough the premature stop would produce intact luciferase, making the cells glow with bright luminescence.

This reporter gene allowed a team at Southern Research to test 771,345 compounds, using high-throughput screening. Of the 180 compounds showing readthrough activity, the small molecule SRI-37240 was the most active.

Researchers found that SRI-37240 restored the function of human CFTR genes with premature termination codon mutations, as tested in rat cell cultures. It significantly increased the amount of CFTR protein and slightly increased the amount of CFTR messenger RNA. An aminoglycoside called G418 is known to aid readthrough of the premature codon mutations, and researchers found that SRI-37240 and G418 acted synergistically to restore CFTR function.

Medicinal chemists synthesized 40 derivatives of SRI-37240, and one, SRI-41315, was more potent and showed better physiochemical features. In human cell lines with the NanoLuc reporter gene, SRI-41315 showed much greater readthrough efficiency than SRI-37240, and SRI-41315 acted synergistically with G418.

Ribosome complexes include ribosomal proteins and other proteins that function as termination factors, translation factors and nonsense-mediated mRNA decay factors. The researchers looked at the abundance of seven of those proteins and found that SRI-41315 dramatically reduced a single termination factor called eRF1, through a proteasome degradation-dependent pathway. This novel mechanism has not been previously seen for a pharmacological agent.

This is progress, Bedwell and Rowe say, yet hurdles remain. Unfortunately, the two compounds had a deleterious effect on ion conductance mediated by the epithelial sodium channel, which limits development in their current form as a treatment for cystic fibrosis. The already known readthrough effect of aminoglycosides is also limited because these antibiotics do not restore therapeutic levels of CFTR, and they also must be given intravenously and can be toxic.

Bedwell and Rowe say it is increasingly likely that multiple distinct agents with different mechanisms of action will be required to impart a clinically impactful response. They concluded, "While further medicinal chemistry is needed to identify readthrough compounds that maximally impact CFTR function without undesirable off-target effects, the results presented here suggest this path is clearly achievable."

Co-first authors of the study, "A small molecule that induces translational readthrough of CFTR nonsense mutations by eRF1 depletion," are Jyoti Sharma, UAB Department of Medicine, and Ming Du, UAB Department of Biochemistry and Molecular Genetics.

Support came from the Cystic Fibrosis Foundation and from National Institutes of Health grants P30DK072482. 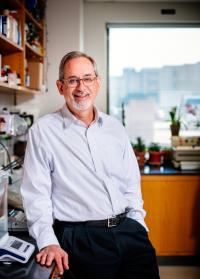