Allowing farmers to harvest vegetation from their riparian buffers will not significantly impede the ability of those streamside tracts to protect water quality by capturing nutrients and sediment -- and it will boost farmers' willingness to establish buffers.

That is the conclusion of Penn State College of Agricultural Sciences researchers, who compared the impacts of six riparian buffer design scenarios over two, four-year crop rotations in two small central and southeastern Pennsylvania watersheds. Two of the buffer scenarios included the harvesting of switchgrass and swamp willow trees.

Allowing farmers to harvest vegetation from their riparian buffers and sell it for biofuels -- not permitted under current Conservation Reserve Enhancement Program, or CREP, federal regulations -- would go a long way toward persuading farmers to establish riparian buffers, researchers contend. And farmers' buy-in is badly needed in Pennsylvania, where hundreds of miles of new buffers are needed along streams emptying into the Chesapeake Bay to help the state meet water-quality standards.

"This is the first long-term study in the Chesapeake Bay watershed to model how harvesting vegetation affects riparian buffer performance over the full length of a buffer contract," said researcher Heather Preisendanz, associate professor of agricultural and biological engineering. "Allowing harvesting of the buffer vegetation -- either trees or grasses -- minimally impacted water quality, with only slight annual average reductions in the capture of nitrogen, phosphorus and sediment."

In addition, she noted, under the highest input loading conditions -- heavy runoff after storms -- buffers with lower removal efficiencies removed more total mass of pollutants than did buffers with high-removal efficiencies, if they were between streams and fields with row crops such as corn and soybeans. The location of the buffer was most important.

The research team developed these scenarios after considering feedback from focus group meetings with farmers in the two watersheds. Farmers indicated they wanted to be able to install buffers tailored to their properties with the prospect of generating limited revenue.

In the Spring Creek watershed -- which has been studied closely by Penn State agricultural scientists for decades -- 16 years of daily-scale nutrient and sediment loads from three crop rotations and two soils were simulated in a soil and water assessment tool. That data was used as an input to a riparian ecosystem management model used nationally to better understand how a buffer's effectiveness changes as a function of input load, buffer design and buffer management.

The simulation results, recently published in the Journal of Environmental Quality, suggest that for buffers of the same width, the farmer-preferred grass vegetation outperformed policy-preferred vegetation of trees for sediment, nitrogen and phosphorus removal.

The findings of the research have important implications for informing flexible buffer design policies and enhanced placement of buffers in watersheds impaired by nutrient and sediment, Preisendanz explained. She pointed out, however, that more research may be needed to examine tradeoffs between water-quality impacts and other ecosystem services, such as streambank stabilization, habitat and stream shading.

"If incorporated into policy, these findings could remove one barrier to farmer adoption of riparian buffers," she said. "Based on our conversations with famers in focus groups, we think this approach -- government being more flexible with buffer designs and allowing harvesting -- would go a long way toward farmers agreeing to create more riparian buffers."

The state Department of Conservation and Natural Resources currently is promoting "multifunctional" buffers, Preisendanz added. "Our hope is that this work will help to inform tradeoffs of flexible buffer designs and management options in this new program."

Fei Jiang, now a postdoctoral scholar in entomology, then a graduate student in soil science, led the research. Also participating in the study were Cibin Raj, assistant professor of agricultural and biological engineering, and Patrick Drohan, associate professor of pedology, both at Penn State; and Tamie Veith, agricultural engineer with the U.S. Department of Agriculture's Pasture Systems and Watershed Management Research Unit. 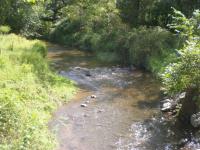