Unlike humans and great apes, rhesus monkeys don't realize when they look in a mirror that it is their own face looking back at them. But, according to a report in the Cell Press journal Current Biology on January 8, that doesn't mean they can't learn. What's more, once rhesus monkeys in the study developed mirror self-recognition, they continued to use mirrors spontaneously to explore parts of their bodies they normally don't see.

The discovery in monkeys sheds light on the neural basis of self-awareness in humans and other animals.

"Our findings suggest that the monkey brain has the basic 'hardware' [for mirror self-recognition], but they need appropriate training to acquire the 'software' to achieve self-recognition," says Neng Gong of the Chinese Academy of Sciences.

In earlier studies, scientists had offered monkeys mirrors of different sizes and shapes for years, even beginning at a young age, Gong explains. While the monkeys could learn to use the mirrors as tools for observing other objects, they never showed any signs of self-recognition. When researchers marked the monkeys' faces and presented them with mirrors, they didn't touch or examine the spot or show any other self-directed behaviors in front of those mirrors in the way that even a very young person would do.

In the new study, Gong and his colleagues tried something else. They sat the monkeys in front of a mirror and shined a mildly irritating laser light on the monkeys' faces. After 2 to 5 weeks of the training, those monkeys had learned to touch face areas marked by a spot they couldn't feel in front of a mirror. They also noticed virtual face marks in mirroring video images on a screen. They had learned to pass the standard mark test for mirror self-recognition.

Most of the trained monkeys--five out of seven--showed typical mirror-induced self-directed behaviors, such as touching the mark on the face or ear and then looking and/or smelling at their fingers as if they were thinking something like, "Hey, what's that there on my face?" They also used the mirrors in other ways that were unprompted by the researchers, to inspect other body parts.

The findings in monkeys come as hopeful news for people who are unable to recognize themselves in the mirror due to brain disorders such as mental retardation, autism, schizophrenia, or Alzheimer's disease, the researchers say.

"Although the impairment of self-recognition in patients implies the existence of cognitive/neurological deficits in self-processing brain mechanisms, our finding raised the possibility that such deficits might be remedied via training," they write. "Even partial restoration of self-recognition ability could be desirable."

Monkeys can learn to see themselves in the mirror 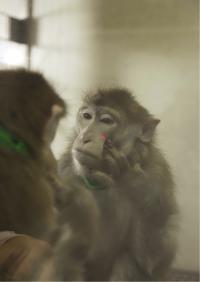 Rhesus Monkeys Can Learn to Recognize Themselves in the Mirror

Rhesus Monkeys Can Learn to Recognize Themselves in the Mirror 2