Many of the biggest questions in physics can be answered with the help of quantum field theories: They are needed to describe the dynamics of many interacting particles, and thus they are just as important in solid state physics as in cosmology. Often, however, it is extremely complicated to develop a quantum field theoretical model for a specific problem - especially if the system in question consists of many interacting particles.

Now a team from the TU Wien and the University of Heidelberg has developed methods with which these models can be directly obtained from experimental measurements. Instead of comparing the experimental results to theoretical model predictions, it is, in a certain sense, possible to measure the theory itself. This should now shed new light on the complicated field of many-body quantum physics.

In recent years, a new method of studying quantum physical systems has gained importance - the so-called "quantum simulators". "We simply do not have a satisfactory description of some quantum systems, for example high-temperature superconductors. Other systems can just not be observed directly, such as the early universe shortly after the Big Bang. Suppose we still want to learn something about such quantum systems - then we simply choose another system that can be easily controlled in the laboratory and adjust it so that it behaves in a similar way to the system we are actually interested in. For example, we can use experiments on ultracold atoms to learn about systems that we would otherwise not be able to study at all," explains Jörg Schmiedmayer from the Vienna Center of Quantum Science and Technology (VCQ) at TU Wien. This is possible because there are fundamental similarities between different quantum physical descriptions of different systems.

But no matter which quantum system is studied, scientists always come across a fundamental problem: "If there are too many particles involved, the formulas of quantum theory quickly become so complicated that they cannot be solved, not even with the best supercomputers in the world," explains Sebastian Erne. "That's a pity, because systems consisting of many particles are particularly interesting. In everyday life, it is always the case that many particles play a role at the same time."

Getting Rid of the Details

In general, it is not possible to solve the exact quantum theory for a many-particle-system, in which every single particle is considered. One has to find a simplified quantum description that contains all the essential properties, but no longer relies on details about the individual particles. "This is similar to describing a gas," explains Jörg Schmiedmayer. "We're not interested in every single atom, but in more general variables such as pressure and temperature."

But how do you arrive at such theories for many-body systems? Deriving them purely mathematically from the laws of nature that apply to individual particles is extremely complicated. But as it now turns out, this is not necessary. "We have found a method of reading the quantum field theoretical description directly from the experiment," says Schmiedmayer. "In a certain sense, nature provides the formulas, with which it must be described, all by itself."

We know that every quantum theory has to obey certain formal rules - we talk for example about correlations, propagators, vertices, Feynman diagrams - the basic building blocks of every quantum physical model. The research team of TU Wien and the University of Heidelberg has found a way to make these individual basic building blocks experimentally accessible. The experimental measurements result in an empirically obtained quantum theory for a many-body system, without having to work with paper and pencil.

"For years, we have suspected that this is theoretically possible, but not everyone believed us that it actually works," says Jörg Schmiedmayer. "Now we have shown that we were right - by looking at a special case where the theory can also be found and (in certain limits) solved mathematically. Our measurement results provide exactly the same theory building blocks."

The experiment was done with clouds of thousands of ultracold atoms that are trapped in a magnetic trap on an atomic chip. "From the quantum wave patterns of these atomic clouds, we can determine the correlation functions from which the basic building blocks of the appropriate theory can be derived," explains Schmiedmayer.

The results have now been published in the journal "Physical Review X". The team hopes that this will significantly simplify the study of quantum many-particle systems. Perhaps it will shed some light on some of the big questions in physics.

How nature tells us its formulas 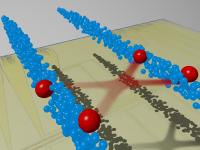