Infrared imagery provides forecasters with a look at the temperature of cloud tops in tropical cyclones, sea surface and land surface temperatures and more. NASA infrared imagery from the morning of June 24 revealed that Darby had strong convection that is an indicator of a strengthening storm. Tropical Storm Darby became the second hurricane of the Eastern Pacific Ocean season this morning.

When NASA's Aqua satellite flew over Darby on June 24 at 08:23 UTC (4:23 a.m. EDT), the Atmospheric Infrared Sounder (AIRS) instrument onboard the satellite captured an infrared image of Darby's clouds, hours before it achieved hurricane status. The infrared imagery showed very high, cold thunderstorm cloud tops in the southeast and northern quadrants of the storm indicating strong convection. Convection is rapidly rising air the condenses and forms clouds (and in a tropical cyclone, it forms the thunderstorms that power the cyclone).

At 11 a.m. EDT (8 a.m. PDT) on June 24, the National Hurricane Center announced that Darby achieved hurricane status, making it the second hurricane of the Eastern Pacific Ocean season, just after Celia, which is spinning at sea much farther west. Hurricane Darby has maximum sustained winds near 75 mph, making it a category one hurricane on the Saffir-Simpson scale. (Category one hurricanes begin at 74 mph). Darby is located about 235 miles (375 km) south-southwest of Puerto Escondido, Mexico, near 12.8 North and 98.7 West. Darby is moving west near 9 mph (15 km/hr) and has a minimum central pressure near 990 millibars.

The National Hurricane Center forecasters expect vertical wind shear (winds that can tear a tropical cyclone apart) to remain light, so there's an opportunity for Darby to strengthen a little over the next couple of days before the winds increase. 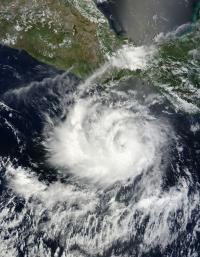