On June 11 at 09:35 UTC (5:35 a.m. EDT) the AIRS instrument aboard NASA's Aqua satellite gathered infrared data on the tropical cyclone as it neared Oman. In a false-colored image of the data created at NASA's Jet Propulsion Laboratory in Pasadena, Calif., it was evident that wind shear was elongating tropical cyclone Ashobaa. Cloud top temperatures were near minus 63 degrees Fahrenheit/ minus 52 degrees Celcius from southwest to northeast of the center.

The next day, the MODIS or Moderate Resolution Imaging Spectroradiometer instrument aboard NASA's Terra satellite captured a visible image of tropical cyclone Ashobaa after it passed Masirah Island. Terra saw Ashobaa as it was making landfall along the east coast of Oman on June 12 at 7:15 UTC (3:15 a.m. EDT). At that time, the center of the storm had already made landfall, and the southern quadrant was still over Masirah Island.

Now that Ashobaa has moved over land and is also being affected by dry air, it has weakened to a remnant low pressure area and is expected to dissipate in the next day. 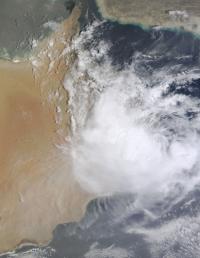