By combining observations of the distant Universe made with ESA's Herschel and Planck space observatories, cosmologists have discovered what could be the precursors of the vast clusters of galaxies that we see today.

Galaxies like our Milky Way with its 100 billion stars are usually not found in isolation. In the Universe today, 13.8 billion years after the Big Bang, many are in dense clusters of tens, or even hundreds of galaxies.

However, these clusters have not always existed, and a key question in modern cosmology is how such massive structures assembled in the early Universe.

Pinpointing when and how they formed should provide insight into the process of galaxy cluster evolution, including the role played by dark matter in shaping these cosmic metropolises.

Now, using the combined strengths of the Herschel Space Observatory and the Planck Satellite, astronomers have found objects in the distant Universe, seen at a time when it was only three billion years old, which could be precursors of the clusters seen around us today.

"Because we are looking so far back in time, and because the the universe is assumed to be homogenous in all directions, we think it's very similar to looking at the equivalent of what a baby cluster might look like," said Brenda L. Frye, an assistant astronomer at the University of Arizona's Steward Observatory who was involved in the research.

"In contrast to previous observations, for which the odd one or two baby clusters was found which one would put in a zoo, we now have found a real sample of 200 baby clusters."

The main goal of Planck, a space observatory operated by the European Space Agency, was to provide the most precise map of the relic radiation of the Big Bang, the cosmic microwave background. To do so, it surveyed the entire sky in nine different wavelengths from the far-infrared to radio, in order to eliminate foreground emission from our galaxy and others in the Universe.

But those foreground sources can be important in other fields of astronomy, and it was in Planck's short wavelength data that scientists were able to identify 234 bright sources with characteristics that suggested they were located in the distant, early Universe.

Another space observatory - Herschel - then observed these objects across the far-infrared to submillimeter wavelength range (just a bit shorter than microwaves), but with much higher sensitivity and angular resolution. Herschel revealed that the vast majority of the Planck-detected sources are consistent with dense concentrations of galaxies in the early Universe, vigorously forming new stars.

Each of these young galaxies is seen to be converting gas and dust into stars at a rate of a few hundred to 1,500 times the mass of our sun per year. By comparison, our own Milky Way galaxy today is producing stars at an average rate of just one solar mass per year.

"It was not known whether young galaxies form stars gradually, like marathon runners pacing themselves or in bursts," Frye said. "It turns out these young galaxies were not forming slowly, but in a dramatic way. Lighting up with star formation, they appear like fireworks going off in the sky. It's like sprinting the first mile of a 26-mile marathon, and then walking the rest of the way."

Because of their extreme distance, astronomers would not be able to see these "fireworks" in single galaxies, but because most occur in clusters, they appear bright. However, here and there, they detected single galaxies that appeared much brighter than they should.

"In a small number of cases, we are finding only one object instead of a cluster, which we shouldn't be able to see, so there is some other mystery there," Frye said.

An expert in gravitational lensing, Frye was called in to join the research team to study those rare cases of "mystery fireworks galaxies."

"The answer is that these objects are brightened up by what you could call a natural telescope in space," she explained. "In a few cases, we can see individual far-away galaxies lighting up with star formation because they are situated along just at the right line of sight where their light passes through a massive galaxy clusters close to Earth."

As predicted by Einstein's Theory of General Relativity, the foreground cluster bends the light from the background galaxy due to its gravity, resulting in an image of the far-away galaxy that is boosted in brightness.

"Why we find these enigmatic examples of single ones when they should be in clusters, is what we're studying here at the UA," Frye said. "These might be fainter examples in general, or they, too, may have friends, which haven't turned on their fireworks just yet."

Frye took advantage of a spectrograph instrument called Hectospec at the MMT Observatory, a partnership between the UA and the Smithsonian Institution of Astrophysics.

"Hectospec acts like a prism, breaking the emissions coming from those protogalaxies into a rainbow of light, so we can very quickly study these really interesting objects, which may have been very much like what the Milky Way may have looked like earlier in cosmic history."

"A key feature that sets our instrument apart from the rest of the world is that we can get the spectra of 300 objects at the same time," Frye said.

While the astronomers have not yet conclusively established the ages and luminosities of many of these newly discovered distant galaxy concentrations, they are the best candidates yet found for 'proto-clusters' - precursors of the large, mature galaxy clusters we see in the universe today.

"Hints of these kinds of objects had been found earlier in data from Herschel and other telescopes, but the all-sky capability of Planck revealed many more candidates for us to study," said Hervé Dole of the Institut d'Astrophysique Spatiale in Orsay, France, lead scientist of the analysis published in the journal Astronomy & Astrophysics. "We still have a lot to learn about this new population, requiring further follow-up studies with other observatories. But we believe that they are a missing piece of cosmological structure formation."

"We are now preparing an extended catalogue of possible proto-clusters detected by Planck, which should help us identify even more of these objects," added Ludovic Montier of the Institut de Recherche en Astrophysique et Planétologie in Toulouse, France, who is the lead scientist of the Planck catalogue of high-redshift source candidates, which is about to be delivered to the community.

"High-redshift infrared galaxy overdensity candidates and lensed sources discovered by Planck and confirmed by Herschel-SPIRE," is authored by the Planck Collaboration.

A news release issued by the Institut d'Astrophysique Spatiale (IAS) with additional images is online at http://www.ias.fr/en/content/enigmatic-high-redshift-galaxies-discovered-planck-and-herschel 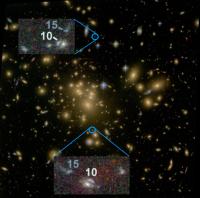 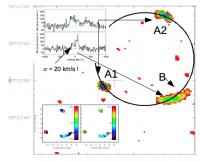