Increasing intake of the omega-3 fatty acids DHA and EPA, found in popular fish-oil supplements, may protect against blindness resulting from abnormal blood vessel growth in the eye, according to a study published online by the journal Nature Medicine on June 24. The study was done in mice, but a clinical trial at Children’s Hospital Boston will soon begin testing the effects of omega-3 supplementation in premature babies, who are at risk for vision loss.

Abnormal vessel growth is the cause of retinopathy of prematurity, diabetic retinopathy in adults, and “wet” age-related macular degeneration, three leading causes of blindness. Retinopathy, affecting about 4 million diabetic patients and about 40,000 premature infants in the United States, is a two-step disease that begins with a loss of blood vessels in the retina (the nerve tissue at the back of the eye that sends visual signals to the brain). Because of the vessel loss, the retina becomes oxygen-starved and sends out alarm signals that spur new vessel growth. But the new vessels grow abnormally and are malformed, leaky and over-abundant. In the end stage of the disease, the abnormal vessels pull the retina away from its supporting layer, and this retinal detachment ultimately causes blindness.

“Our studies suggest that after initial loss, vessels re-grew more quickly and efficiently in the omega-3-fed mice,” says Connor, the study’s first author. “This increased the oxygen supply to retinal tissue, resulting in a dampening of the inflammatory ‘alarm’ signals that lead to pathologic vessel growth.”

Because omega-3 fatty acids are highly concentrated in the retina, a mere 2 percent change in dietary omega-3 intake was sufficient to decrease disease severity by 50 percent, the researchers note. Validating their findings, results were virtually identical in mice whose omega-3 fatty acid levels were increased through genetic means.

Omega-3 fatty acids like DHA and EPA are thought to dampen inflammation in the body. They are often lacking in Western diets; instead, omega-6 fatty acids predominate. The ideal omega-6:omega-3 ratio is thought to be 2:1 to 5:1, whereas typical Western diets have ratios of 10:1 or higher. Premature infants are especially lacking in omega-3 fatty acids, because they miss getting this nutrient from their mothers, a transfer that normally happens in the third trimester of pregnancy.

The researchers demonstrated that the omega-3-based diet suppressed production of TNF-alpha, reducing the inflammatory response in the retina, whereas the omega-6-based diet increased TNF-alpha production. The retinas of omega-3-fed mice also had increased production of the anti-inflammatory compounds neuroprotectinD1, resolvinD1 and resolvinE1. These compounds, derived from omega-3 fatty acids, also potently protected against pathological vessel growth, and they were not detected in the retinas of mice fed the omega-6 diet.

“If omega-3 fatty acids, or these anti-inflammatory mediators, are as effective in humans and they are in mice, simple supplementation could be a cost-effective intervention benefiting millions of people,” says Smith, the study’s senior investigator. “The cost of blindness is enormous.”

Aside from fish-oil supplements, the most widely available source of omega-3 fatty acids is coldwater oily fish (wild salmon, herry, mackerel, anchovies, sardines). The compounds can also be made synthetically from algae or other non-fish sources.

Paul A. Sieving, MD, PhD, director of the NEI, which provided funding for the study, said, “This study shows the benefit of dietary omega-3 fatty acids in protecting against the development and progression of retinal disease. It gives us a better understanding of the biological processes that lead to retinopathy and how to intervene to prevent or slow disease. It will be interesting to see if human clinical trials show similar beneficial effects.”

The clinical trial at Children’s Hospital Boston will follow premature newborns who are unable to feed and are receiving parenteral nutrition, with omega-3 fatty acids as part of their IV solution. The hope is that the omega-3 supplementation will allow the retina and its vessels to develop normally. “Once the retina is detached, there’s little you can do,” says Smith. “We want to give omega-3 right from the beginning to mimic what the infants would be getting from their mothers in utero, had they not been born prematurely.”

In addition to retinopathy, the researchers speculate that omega-3 fatty acids may help reduce vision loss in people with “wet” or neovascular phase of age-related macular degeneration (AMD), a disease that also involves abnormal vessel growth. This possibility is now being explored in a large, NEI-funded clinical trial called AREDS2, coordinated by Emily Chew and John Paul SanGiovanni, both co-authors of the animal study. (See www.nei.nih.gov/neitrials/viewStudyWeb.aspx?id=120.)

Drugs that block the growth factor VEGF are also being studied in the end stages of retinopathy of prematurity and diabetic retinopathy, and have been approved for use in “wet” AMD, Smith notes. While injection of anti-VEGF compounds into the eye can block pathological vessel growth in the retina, omega-3 supplementation may reduce the need for repeated injections by preventing some patients from advancing to end-stage disease, she says.

The study was funded by the V. Kann Rasmussen Foundation, the National Eye Institute (NEI) of the National Institutes of Health, the Children's Hospital Boston Mental Retardation and Developmental Disabilities Research Center, and a Research to Prevent Blindness Lew Wasserman Merit Award.

Children’s Hospital Boston is home to the world’s largest research enterprise based at a pediatric medical center, where its discoveries have benefited both children and adults since 1869. More than 500 scientists, including eight members of the National Academy of Sciences, 11 members of the Institute of Medicine and 10 members of the Howard Hughes Medical Institute comprise Children’s research community. Founded as a 20-bed hospital for children, Children’s Hospital Boston today is a 347-bed comprehensive center for pediatric and adolescent health care grounded in the values of excellence in patient care and sensitivity to the complex needs and diversity of children and families. Children’s also is the primary pediatric teaching affiliate of Harvard Medical School. For more information about the hospital and its research visit: www.childrenshospital.org/newsroom.

Can blindness be prevented through diet? 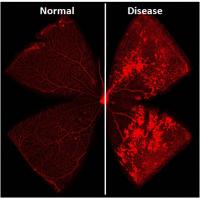