Some of us struggle to find our way back home while walking from an unfamiliar location in the usual, forward direction. Now imagine if you had to stay on the right path while walking backward or even spinning around and around. Now researchers reporting in Current Biology on January 19 have found that ants can do exactly that. They also have new insight into the mental gymnastics required.

In fact, ants can keep themselves headed in the northerly direction by going forward (facing north), he says, backward (facing south), or sideways (facing east or west). The discovery is noteworthy because it challenges the notion that insects are limited to performing simple, stimulus-response behaviors.

Wystrach and colleagues knew that ants often manage heavy food items by pulling them along backward. Another report demonstrated that the insects' navigational abilities weren't impaired under those circumstances. The insects had no trouble making it back to the nest with their load. The findings suggested that the ants might be able to recognize the world around them regardless of the direction they were facing.

"This was at odds with our understanding of how memories of the scenes are stored in the insect brain," Wystrach says.

To find out how the insects were really managing, the researchers tested desert ants living in their natural environment. They sunk barriers into the ground, forcing the ants along a one-way route to the nest and then offered them either a small cookie or a larger, more unwieldy one.

Ants with the small cookie dashed off to the south and made a sharp right turn. Ants traveling backward while pulling a larger cookie that didn't stop to look around or "peek" missed the turn. But, the researchers found, when those ants hauling their load backward did stop to take a peek in the forward direction, their navigational abilities were restored. In other words, they recognized their new direction and memorized it for use while walking backward.

Further experiments showed the ants kept to the path by following cues in the sky. They could also maintain their path while traveling in any direction--forward, backward, or sideways.

The findings show that the ants remembered the scene based on how it looked while facing forward. That's why they had to turn around and look. But ants are then able to transfer that memory to a representation of directions centered on the world rather than on themselves.

That's pretty impressive, according to the researchers. "Until recently, we thought their navigation was based on stereotyped strategies from distinct brain modules," Wystrach says. In contrast, "our results show that it is about the fine orchestration of multiple representation and memories involving the transfer of information between different brain areas."

Wystrach says the findings are a reminder that ants are "not simple little automata." Rather, their behaviors are flexible, emerging from the fine orchestration of multiple representation and memories. "The more research advances, the more sophisticated we realize insects are," he says.

The researchers are now curious to conduct further tests of the ants' cognitive skill. For instance, when they drop a cookie to look around and then resume dragging it, do they actually remember the weight of the cookie? Do they remember that it needed to be dragged backward? Those details can now be easily tested.

In the longer term, Wystrach says, they now hope to explore the interplay between different brain areas that make those behaviors possible.

This work was supported by the EPSRC.

Ants find their way even while traveling backward 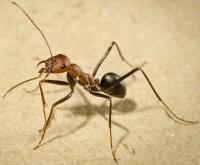 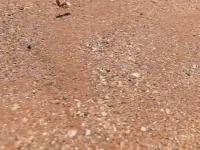