Catalytic hydrogenation of carbon dioxide (CO2) is a green and sustainable means of synthesizing commodity chemicals such as methanol. This conversion process is key to realizing the "methanol economy" or creating "liquid sunshine", both aspects of the circular economy. Recent studies revealed the potential for a family of metal oxides to catalyze this reaction. However, further optimizing their catalytic performance for industrial applications remained a great challenge, mostly due to the difficulties related to the rational design and controlled synthesis of these catalysts.

Motivated by such a challenge, a team jointly led by Profs. SUN Yuhan, GAO Peng, and LI Shenggang at the Shanghai Advanced Research Institute (SARI) of the Chinese Academy of Sciences, reported a successful case of theory-guided rational design of indium oxide (In2O3) catalysts for CO2 hydrogenation to methanol with high activity and selectivity. The new findings were published in the latest issue of Science Advances on June 17.

To rationally design In2O3-based nanocatalysts with favorable methanol synthesis performance, researchers carried out extensive density functional theory (DFT) calculations to establish the catalytic mechanism of the In2O3 catalyst during CO2 hydrogenation to methanol and carbon dioxide by identifying preferred pathways. The computational modeling identified the rarely studied {104} facet of hexagonal In2O3 as the most favorable for methanol synthesis.

On the basis of this theoretical prediction, several experimental methods were then employed to synthesize In2O3 catalysts in different phases with distinct morphologies.

Interestingly, one of the four In2O3 catalysts synthesized in this way was confirmed to mainly expose the theoretically identified {104} facets. This catalyst also exhibited the best performance in terms of both activity and selectivity, confirming the DFT prediction. The methanol synthesis reaction catalyzed by this catalyst is favorable even at the very high temperature of 360 °C.

The In2O3 catalyst discovered in this research is promising as a way to directly convert CO2 into methanol for industrial applications. In addition, the discovery of this In2O3 catalyst will promote the further development of oxide/zeolite bifunctional catalysts for direct CO2 hydrogenation to various C2+ hydrocarbons (lower olefins, gasoline, aromatics and so on) via the methanol intermediate. Just as importantly, this discovery also highlights the pivotal role of computational science in helping to design industrially relevant catalysts. 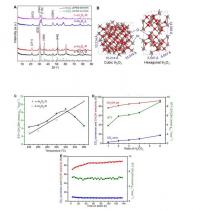