Reconstructed food webs from the Ancestral Puebloan southwestern United States show the complexity and interconnectedness of humans, other animals, crops and the environment, in an area of uncertain climate and resources, according to researchers, who think climate change and human decisions then, may shed light on future human choices.

"As southwestern archaeologists, we know that Ancestral Puebloan people were intrinsically connected to the environment," said Stefani Crabtree, postdoctoral fellow in human behavioral ecology in the Department of Anthropology, Penn State. "But, most food webs have omitted humans."

Traditionally, food webs, while they map the interaction of all the animals and plants in an area, usually do not emphasize the human component. Crabtree and colleagues created a digital food web that captures all categories of consumers and consumed, can be defined for specific time periods and can also represent food webs after major food sources or predators disappear from the area. If an area suddenly becomes devoid of deer or humans or corn, for example, a food web of that situation can show where predators went to find prey, or which prey thrived for lack of a predator.

These knockout food webs -- webs missing a specific predator or prey -- show the changes and pressures on the food sources substituted for the missing ones, or the changes that occur when pressure is removed by removing a major consumer. The researchers report the results of their study today (Apr. 10) in the Journal of Archaeological Science.

"When people show up in the area around A.D. 600 they bring corn," said Crabtree. "It takes a while for critters to get used to it, but eventually, everything that eats vegetation, eats corn and prefers it."

Humans bringing corn into an area is a major disruption of the existing food web. Planting corn means clearing fields to displace whatever plants and animals were there, creating a high-energy plant source of food and switching plant eaters to the preferred higher-calorie food source.

In the American Southwest, the Ancestral Puebloan people eventually preyed on their deer population enough so that they deer were no longer a reliable source of food. To compensate for this, they began to domesticate turkeys for food. Turkeys need to be fed corn if they are captive and that competes with corn for human consumption. At this time, corn made up 70 to 80 percent of Ancestral Puebloans' food and so feeding turkeys altered the food web.

To create the food web, the team identified all the common, noninvasive species in the area. They then added species that were found in archaeological sites, but were absent from the modern lists. In some food webs, components are identified by their function, so all humming birds are considered flying pollinators, but in this case each type of humming bird received its own place in the web, linked to what it ate and what, if anything, ate it. This produced a very complicated web, but supplied exceptional redundancy.

"In the insect world it is harder to get at the data," said Crabtree. "We have not been able to get at good databases so we aggregate at the functional level-- pollinators or bloodsuckers for example."

The exception to individual web entries then are invertebrates -- insects, spiders, snails, etc. -- that were classified by their function. Invertebrates are organized to the level of order and then grouped by function. With insects, for example, the researchers would group butterflies and moths that pollinated and sipped nectar, together in one group.

The overall food web had 334 nodes representing species or order-level functional groups with 11,344 links between predator and prey.

The researchers realize that there are differences in the environment between now and the Ancestral Puebloan period, but many things, such as pinon-juniper woodlands and sage flats are the same. Enough similarity exists for this approach to work.

The team did not produce just one overall food web, but also food webs corresponding to three archaeological locations and three time periods of Ancestral Pueblo occupation in the area -- Grass Mesa Pueblo for Pueblo I, Albert Porter Pueblo for Pueblo II and Sand Canyon Pueblo for Pueblo III. They began with using archaeological assemblages from these sites incorporating all human prey and all human predators into the food web. Then they included the prey of the primary prey of humans and then predators of these human-prey species. Prey, in this case, includes animals, insects and plants.

When creating knockout food webs, the researchers included only those species that were found in reasonable quantities in the archaeological assemblages at those times.

"Knockout food webs are one of the best ways to understand how people interact with the environment," said Crabtree. "Because we can remove something, predator or prey, and see what would happen."

When major changes in climate variables such as drought, heat and lack of snowpack are factored in, the balance in the food web may become unstable. When food becomes scarce, most mobile creatures, animals and insects move to another location. During the time of the Ancestral Puebloans, this was possible and eventually, these people moved to the area of the Rio Grande in New Mexico and other places in New Mexico and Arizona.

In the past, people migrated, said Crabtree. Unless we figure out better strategies, where are we going to migrate out to? We do not have a place to go, she said.

What people plant and eat has a great effect on the environment and on ecosystems. In the end, those choices will impact human survival, according to the researchers.

This work is part of a collaboration of researchers creating resolved food webs from a variety of places. Crabtree believes that she can compare this project to others that include humans in other geographical areas to help understand ecosystems with humans in them.

Food webs entangle humans in complex relationships with animals, crops and the environment 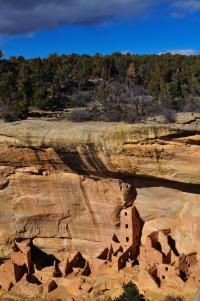