Tropical Depression Bill continues to be a soaker as it travels in an east-northeasterly direction from Arkansas toward the Ohio Valley. NASA's Aqua satellite and NOAA's GOES-East satellites provided a look at the extent and the movement of the storm.

The MODIS instrument aboard NASA's Aqua satellite captured a visible image of Tropical Depression Bill's remnants over the central United States on June 18 at 19:45 UTC (3:45 p.m. EDT). At the time Aqua passed overhead, Bill's center was located in northeastern Oklahoma. The image showed that moisture from the Gulf of Mexico was still streaming into the center of circulation from the south and east of the center.

An animation of NOAA's GOES-East satellite's infrared and visible imagery taken from June 17 through June 19 showed Tropical Storm Bill's movement after landfall in eastern Texas. As Bill progressed on an east-northeasterly track, the clouds associated with the depression stretched out along a cold front that extended from southern New England west to Oklahoma. The animation was created by NASA/NOAA GOES Project at the NASA Goddard Space Flight Center in Greenbelt, Maryland.

At 11 a.m. EDT on Friday, June 19, the National Weather Service Weather Prediction Center (WPC) in College Park, Maryland issued an update on the progression of Tropical Depression Bill is it continued moving through the eastern two-thirds of the U.S. At that time, the center of the depression was tracking through northern Arkansas. It was centered near 36.3 North latitude and 91.4 West longitude, about 117 miles (188 km) northeast of Little Rock, Arkansas. Bill had maximum sustained winds near 25 mph (40 kph) and was moving to the east-northeast at 20 mph (32 kph). Minimum central pressure is 1006 millibars.

Bill Triggers Many Watches and Warnings

Flash flooding is a main concern as Tropical Depression Bill continues to track to the east-northeast. Moderate to heavy rainfall continues with two separate axes of active convection.

The WPC noted "Flash flood warnings are currently in effect across sections of southern Missouri and eastern Illinois. Meanwhile, flood warnings extend across portions of eastern and central Texas, northeastern Oklahoma, and Louisiana and into parts of Arkansas, Missouri and Illinois. Farther north and east, flood warnings are in effect across sections of Illinois, Indiana, and Ohio. Flash Flood and Flood Watches are spread across much of the lower and middle Mississippi valleys and Ohio Valley. 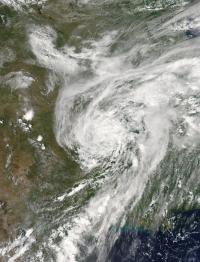