Massive predators like Albertosaurus and Tyrannosaurus rex may have been at the top of the food chain, but they were not the only meat-eating dinosaurs to roam North America, according to Canadian researchers who have discovered the smallest dinosaur species on the continent to date. Their work is also helping re-draw the picture of North America's ecosystem at the height of the dinosaur age 75 million years ago.

"Hesperonychus is currently the smallest dinosaur known from North America. But its discovery just emphasizes how little we actually know, and it raises the possibility that there are even smaller ones out there waiting to be found," said Nick Longrich, a paleontology research associate in the University of Calgary's Department of Biological Sciences. "Small carnivorous dinosaurs seemed to be completely absent from the environment, which seemed bizarre because today the small carnivores outnumber the big ones," he said. "It turns out that they were here and they played a more important role in the ecosystem than we realized. So for the past 100 years, we've completely overlooked a major part of North America's dinosaur community."

In a paper published today in the scientific journal Proceedings of the National Academy of Sciences, Longrich and University of Alberta paleontologist Philip Currie describe a new genus of carnivorous dinosaur that was smaller than a modern housecat and likely hunted insects, small mammals and other prey through the swamps and forests of the late Cretaceous period in southeastern Alberta, Canada. Weighing approximately two kilograms and standing about 50 centimetres tall, Hesperonychus elizabethae resembled a miniature version of the famous bipedal predator Velociraptor, to which it was closely related. Hesperonychus ran about on two legs and had razor-like claws and an enlarged sickle-shaped claw on its second toe. It had a slender build and slender head with dagger-like teeth.

"It was half the size of a domestic cat and probably hunted and ate whatever it could for its size – insects, mammals, amphibians and maybe even baby dinosaurs," Longrich said. "It probably spent most of its time close to the ground searching through the marshes and forests that characterized the area at the end of the Cretaceous."

Fossilized remains of Hesperonychus, which means “western claw,” were collected in 1982 from several locations including Dinosaur Provincial Park. The most important specimen, a well-preserved pelvis, was recovered by legendary Alberta paleontologist Elizabeth (Betsy) Nicholls, after which the species is named. Nicholls was the curator of marine reptiles at the Royal Tyrrell Museum in Drumheller and earned her MSc and PhD degrees at U of C. She passed away in 2004. The fossils remained unstudied for 25 years until Longrich came across them in the University of Alberta’s collection in 2007. Longrich and Currie focused on fossilized claws and a well-preserved pelvis for their description.

"The claws were thought to come from juveniles- they were just so small. But when we studied the pelvis, we found the hip bones were fused, which would only have happened once the animal was fully grown", Longrich said. "Until now, the smallest carnivorous dinosaurs we have seen in North America have been about the size of a wolf. Judging by the amount of material that was collected, we believe animals the size of Hesperonychus must have been quite common on the landscape."

The discovery of Hesperonychus is the first sign of small carnivorous dinosaurs in North America and also extends the timeframe of small, birdlike dromaeosaurs known as the Microraptorinae in the fossil record by approximately 45 million years. Specimens from China have been found dating to 120 million years ago, while Hesperonychus appeared to have thrived until the end of dinosaur age in the late Cretaceous.

The paper "A microraptorine (Dinosauria–Dromaeosauridae) from the Late Cretaceous of North America" by Nicholas R. Longrich and Philip J. Currie is published in the March 16 advanced online edition of the Proceedings of the National Academy of Sciences at: www.pnas.org 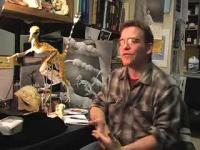