COLUMBUS, Ohio -- Astronomers believe they have discovered the origin of our universe's first super-massive black holes, which formed some 13 billion years ago.

The discovery fills in a missing chapter of our universe's early history, and could help write the next chapter -- in which scientists better understand how gravity and dark matter formed the universe as we know it.

In the journal Nature, Ohio State University astronomer Stelios Kazantzidis and colleagues describe computer simulations in which they modeled the evolution of galaxies and black holes during the first few billion years after the Big Bang.

Our universe is thought to be 14 billion years old. Other astronomers recently determined that big galaxies formed much earlier in the universe's history than previously thought -- within the first 1 billion years, Kazantzidis explained.

These new computer simulations show that the first-ever super-massive black holes were likely born when those early galaxies collided and merged together.

"Our results add a new milestone to the important realization of how structure forms in the universe," he said.

For more than two decades, the prevailing wisdom among astronomers has been that galaxies evolved hierarchically -- that is, gravity drew small bits of matter together first, and those small bits gradually came together to form larger structures.

Kazantzidis and his team turn that notion on its head.

"Together with these other discoveries, our result shows that big structures -- both galaxies and massive black holes -- build up quickly in the history of the universe," he said. "Amazingly, this is contrary to hierarchical structure formation."

The paradox is resolved once one realizes that dark matter grows hierarchically, but ordinary matter doesn't," he continued. "The normal matter that makes up visible galaxies and super-massive black holes collapses more efficiently, and this was true also when the universe was very young, giving rise to anti-hierarchical formation of galaxies and black holes."

For Kazantzidis and other astronomers, our Milky Way galaxy is small compared to others.

"One of them is likely our neighbor in the Virgo Cluster, the elliptical galaxy M87," he said. "The galaxies we saw in our simulation would be the biggest galaxies known today, about 100 times the size of the Milky Way. M87 fits that description."

They started their simulations with two giant primordial galaxies -- ones made of the kinds of stars that were around at the beginning of the universe. Astronomers believe that back then, all stars would have been much more massive than present-day stars -- up to 300 times the mass of our sun.

Then the astronomers simulated the galaxies colliding and merging together.

The astronomers were able to make their discovery because they used supercomputers to provide a high-resolution view of what happened next.

Previous simulations showed details of the merged galaxy down to only about 300 light-years across. A light-year is the distance that light travels in year, about six trillion miles.

These new simulations contained features that were 100 times smaller, and revealed details in the heart of the merged galaxies on a scale of less than a light year.

The astronomers saw two things happen. First, gas and dust in the center of the galaxies condensed to form a tight nuclear disk. Then the disk became unstable, and the gas and dust contracted again, to form an even denser cloud that eventually spawned a super-massive black hole.

The implications for cosmology are far-reaching, Kazantzidis said.

He and his cohorts also hope that their work will aid astronomers who are searching the skies for direct evidence of Einstein's theory of general relativity: gravitational waves.

According to general relativity, any ancient galaxy mergers would have created massive gravitational waves -- ripples in the space-time continuum -- the remnants of which should still be visible today.

New gravitational wave detectors, such as NASA's Laser Interferometer Space Antenna, were designed to detect these waves directly, and open a new window into astrophysical and physical phenomena that cannot be studied in other ways.

Scientists will need to know how super-massive black holes formed in the early universe and how they are distributed in space today in order interpret the results of those experiments. The new computer simulations should provide a clue.

Coauthors on the Nature paper include Lucio Mayer and Simone Callegari of the Institute for Theoretical Physics at the University of Zürich, and Andres Escala, formerly of Stanford University and now at the Universidad de Chile.

This work was funded by the Swiss National Science Foundation, the Center for Cosmology and Astro-Particle Physics at Ohio State, and the Kavli Institute for Particle Astrophysics at Stanford University. Simulations were performed on the Zbox3 supercomputer at the University of Zürich and on the Brutus cluster at ETH Zürich.

When galaxies collide: How the first super-massive black holes were born 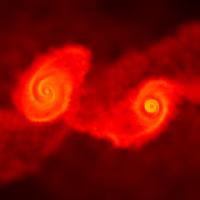 When Galaxies Collide: How The First Super-Massive Black Holes Were Born (2 of 3) 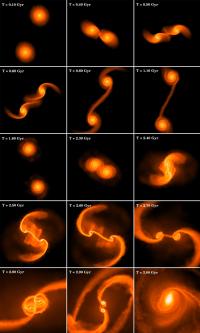 When Galaxies Collide: How The First Super-Massive Black Holes Were Born (3 of 3)