Plants are boring. They just sit there photosynthesizing while animals have all the fun. Right? Not so much. Take a look at the interactions between ants and plants--plants have evolved features specifically to make them enticing to ants, like juicy nectar for the insects to eat and hollow thorns for them to take shelter in. In exchange, plants use ants to spread their seeds and even act as bodyguards. A new study in the Proceedings of the National Academy of Sciences breaks down the genetic history of 1,700 species of ants and 10,000 plant genera, and the researchers found that the long history of ant and plant co-evolution started with ants foraging on plants and plants later responding by evolving ant-friendly traits.

"My main interest is in studying how interactions between organisms have evolved, and how these interactions shape their evolutionary history. When did ants start using plants, and when did plants start making structures for ants to use?" says Matt Nelsen, a Field Museum post-doctoral researcher and the lead author of the PNAS study.

"There are a number of different structures plants make that are specific for ant use," explains Nelsen, who led the study with his fellow Field Museum researchers and co-authors Rick Ree and Corrie Moreau. "Some plants have evolved features that persuade ants into defending them from attack from other insects and even mammals. These include hollow thorns that ants will live inside, or extra nectar on leaves or stems for the ants to eat. Some ants will just cheat and take the nectar and run, but some will stick around and attack anything that tries to hurt the plant," explains Nelsen. Other plants get ants to help them move their seeds around, by bribing them with rich food packets attached to seeds called elaiosomes. "The ant will pick up the seed and carry it away, eat the food packet, and discard the seed - often in a nutrient-rich area where it'll grow better, and since it's farther away from its parent, they won't have to compete for resources."

But scientists weren't sure how the evolutionary relationship between ants and plants got started. If evolution is an arms race between species developing ways to profit off of their neighbors, then scientists wanted to know whether plants or ants fired the first shot. "It was a chicken-and-egg question, whether things started with ants developing behaviors to take advantage of plants, or plants evolving structures to take advantage of ants," says Ree, curator of plants at the Field Museum.

The history of ants and plants evolving together goes back to the time of the dinosaurs, and it's not easy to tell from fossils how the organisms interacted. "There are very few fossil records of these structures in plants, and they don't extend very far back in time. And there are tons of ant fossils, but they typically don't show these ant behaviors--we don't necessarily see an ant preserved in amber carrying a seed," says Nelsen.

So, to determine the early evolutionary history of ant-plant interactions, Nelsen and his colleagues turned to large amounts of DNA data and ecological databases. "In our study, we linked these behavioral and physical features with family trees of ants and plants to determine when ants started eating and living on plants, and when plants developed the capacity to produce structures that ants use," explains Moreau, the Field's curator of ants.

The team mapped the history of plant's ant-friendly traits and of ants' plant use onto these family trees - a process called ancestral state reconstruction. They were able to determine when plants began relying on ants for defense and seed distribution--and it looks like ants have relied on plants for longer than plants have directly relied on ants, since plants didn't evolve these specialized structures until long after ants had been relying on them for food and habitat.

"Some ants don't directly use plants for much, while others rely on them for food, foraging habitat, and nesting. We found that to become fully invested in plant-use, ants first began foraging arboreally, then incorporated plants into their diet, and then from there, they started nesting arboreally. While this stepwise shift towards an increased reliance on plants is intuitive, it still surprised us," says Nelsen.

And while there has been a mutually beneficial relationship between ants and plants over the years, from an evolutionary standpoint, groups of ants that eat, forage on or nest in plants don't seem to be any better off than those that do not. "We don't see parts of the ant family tree that includes ants relying on plants for food or habitat diversifying or growing any faster than those parts of the tree that lack these interactions," says Nelsen. "This study matters because it provides a glimpse into how these widespread and complex interactions evolved."

How plants evolved to make ants their servants 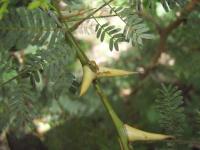