Light can oscillate in different directions, as we can see in the 3D cinema: Each lens of the glasses only allows light of a particular oscillation direction to pass through. However, changing the polarization direction of light without a large part of it being lost is difficult. The TU Vienna has now managed this feat, using a type of light – terahertz radiation – that is of particular technological importance. An electrical field applied to an ultra-thin layer of material can turn the polarisation of the beam as required. This produces an efficient transistor for light that can be miniaturised and used to build optical computers.

Certain materials can rotate the polarization direction of light if a magnetic field is applied to them. This is known as the Faraday effect. Normally, this effect is minutely small, however. Two years ago, Prof. Andrei Pimenov and his team at the Institute of Solid State Physics of TU Vienna, together with a research group from the University of Würzburg, managed to achieve a massive Faraday effect as they passed light through special mercury telluride platelets and applied a magnetic field.

At that time, the effect could only be controlled by an external magnetic coil, which has severe technological disadvantages. "If electro-magnets are used to control the effect, very large currents are required", explains Andrei Pimenov. Now, the turning of terahertz radiation simply by the application of an electrical potential of less than one volt has been achieved. This makes the system much simpler and faster.

It is still a magnetic field that is responsible for the fact that the polarisation is rotated, however, it is no longer the strength of the magnetic field that determines the strength of the effect, but the amount of electrons involved in the process, and this amount can be regulated simply by electrical potential. Hence only a permanent magnet and a voltage source suffice, which is technically comparatively easy to manage.

The light used for the experiments is not visible: it is terahertz radiation with a wavelength of the order of one millimetre. "The frequency of this radiation equates to the clock frequency that the next but one generation of computers may perhaps achieve", explains Pimenov. "The components of today's computers, in which information is passed only in the form of electrical currents, cannot be fundamentally improved. To replace these currents with light would open up a range of new opportunities." It is not only in hypothetical new computers that it's important to be able to control beams of radiation precisely with the newly developed light turning mechanism: terahertz radiation is used today for many purposes, for example for imaging methods in airport security technology. 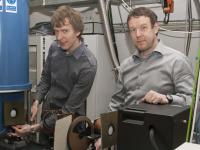