Kenanga formed on Dec. 15 about 1,116 miles east of Diego Garcia, and strengthened into a tropical storm.

When the Global Precipitation Measurement mission or GPM core satellite passed overhead, the rainfall rates it gathered were derived from the satellite's Microwave Imager (GMI) instrument. GPM provided a close-up analysis of rainfall around tropical cyclone Kenanga. Data from GPM's microwave Imager (GMI) and Dual-Frequency Precipitation Radar (DPR) were used in this analysis. DPR found that a powerful storm northeast of Kenanga's center of circulation was dropping rain at a rate of over 119 mm (4.7 inches) per hour.

At NASA's Goddard Space Flight Center in Greenbelt, Maryland, imagery and animations were created using GPM data. A 3-D animation used GPM's radar to show the structure of precipitation within tropical Cyclone Kenanga. The simulated flyby around Kenanga showed storm tops that were reaching heights above 13.5 km (8.4 miles). GPM is a joint mission between NASA and the Japanese space agency JAXA.

JTWC forecasters expect Kenanga to continue strengthening for the next two days and then conditions will deteriorate. After three days the storm is forecast to begin weakening as it interacts with cooler, drier air. 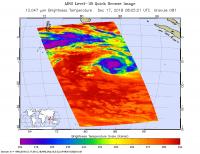 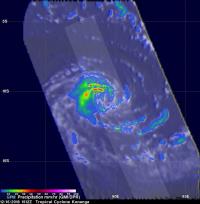