Glassy materials play an integral role in the modern world, but inherent brittleness has long been the Achilles' heel that severely limits their usefulness. Due to the disordered amorphous structure of glassy materials, many mysteries remain. These include the fracture mechanisms of traditional glasses, such as silicate glasses, as well as the origin of the intriguing patterned fracture morphologies of metallic glasses.

Cavitation has been widely assumed to be the underlying mechanism governing the fracture of metallic glasses, as well as other glassy systems. Up until now, however, scientists have been unable to directly observe the cavitation behavior of fractures, despite their intensive efforts.

This situation changed with recent work by Dr. SHEN Laiquan, Prof. BAI Haiyang, Prof. SUN Baoan, and others from Prof. WANG Weihua's group at the Institute of Physics of the Chinese Academy of Sciences (CAS), who have successfully observed the effect of cavitation on fracture behavior in glasses. They revealed that crack propagation is dominated by the self-organized nucleation, growth, and coalescence of nanocavities in metallic glasses.

They showed the evolutionary process of crack morphologies from separated nanocavities to wave-like nanocorrugations, and confirmed that cavitation is the origin of periodic fracture surface patterns.

In addition, they found that cavitation-induced nanopatterns are also prevalent in typical polymer glass (polycarbonate) and silicate glass (silica), indicating that the cavitation mechanism is common in the fracture of glasses. Plastic flow exhibited by the cavitation process thus proves that nanoscale ductility is involved in the breakage of nominally brittle glasses.

The discovery of cavitation behavior in the fracture of glasses challenges the traditional concept of how glasses break. The researchers' findings have significant implications for the understanding of the fundamental process of failure in disordered systems, and provides incentives for engineering better glasses.

This study, entitled "Observation of cavitation governing fracture in glasses," was published in Science Advances. 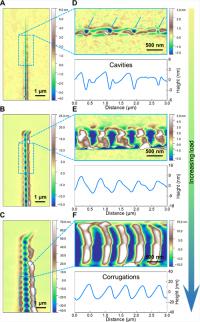 Evolution of cracks from separated nanocavities to wave-like nanocorrugations