Tropical Cyclone Donna continues to move through the South Pacific Ocean as a major hurricane. NASA's Aqua satellite passed over the storm and captured an image of a clear eye as the storm was located between the island nations of Vanuatu and New Caledonia. The GPM satellite found that the powerful hurricane was generating very high amounts of rainfall.

Over the weekend tropical cyclone Donna dropped very heavy rain over Vanuatu as it moved toward the west of the islands. Donna had intensified and had maximum sustained winds of 115 knots (132 mph) on Monday morning, May 8. This made it the equivalent of a category four on the Saffir-Simpson hurricane wind scale.

Vanuatu is a South Pacific Ocean nation made up of about 80 islands. New Caledonia is a French territory made up of dozens of islands that lie southwest of Vanuatu.

As Tropical Cyclone Donna was intensifying the GPM core observatory satellite had two excellent views of the storm on succeeding days. When GPM flew over Donna on May 6, 2017 at 0146 UTC (May 5 at 9:46 p.m. EDT) the tropical cyclone was getting organized. The following day on May 7 at 1411 UTC (10:11 a.m. EDT) GPM showed that Donna was very well organized and had a well-defined eye. GPM's Microwave Imager (GMI) and Dual-Frequency Precipitation Radar (DPR) data showed that Vanuatu was being drenched with bands of very intense rain to the east of Donna's center. DPR showed that precipitation was falling at a rate of over 189 mm (7.4 inches) per hour in the eastern side of Donna's eye wall.

At NASA's Goddard Space Flight Center in Greenbelt, Maryland, Tropical Cyclone Donna's rainfall structure was examined using data from GPM's radar (DPR Ku Band). GPM's DPR data was made into a 3-D view of the tropical cyclone's radar reflectivity. GPM's data swath revealed a cross section of rainfall through the eastern side of the tropical cyclone. GPM showed that some storm top heights were reaching altitudes above 14.3 km (8.9 mile) in tall storms in the eastern eye wall. GPM is a joint mission between NASA and the Japanese space agency JAXA.

On May 8 at 02:50 UTC (May 7 at 10:50 p.m. EDT), NASA's Aqua satellite passed over Donna. The Moderate Resolution Imaging Spectroradiometer or MODIS instrument aboard Aqua captured a visible image of Tropical Cyclone Donna that showed the eye of the storm between New Caledonia and Vanuatu.

At 0900 UTC (5 a.m. EDT), Donna's maximum sustained winds were near 115 knots (132 mph/213 kph) making it a Category 4 hurricane on the Saffir-Simpson Hurricane Wind Scale. It was centered near 17.5 degrees south latitude and 165.1 degrees east longitude, about 183 nautical miles west of Port Vila, Vanuatu. Donna was moving to the south-southeast at 7 knots (8 mph/13 kph).

The Vanuatu National Disaster Management Office (NDMO) advised residents that Red Alert is active for Sanma, Malampa and Shefa provinces and a Yellow Alert is now in effect for the Tafea province. For updated forecasts for Vanuatu, visit: http://www.vmgd.gov.vu.

New Caledonia Meteorological Service continues to issue warnings on Donna. Updates can be found at: http://www.meteo.nc/

The Joint Typhoon Warning Center (JTWC) predicts that Tropical Cyclone Donna has reached its peak intensity and will weaken as it heads toward the south-southeast over the next few days. Donna is expected to still be a powerful hurricane as it passes close to the east of New Caledonia. After May 9, the storm is forecast to move into an area with cooler sea surface temperatures and increased wind shear that are expected to weaken it quickly. 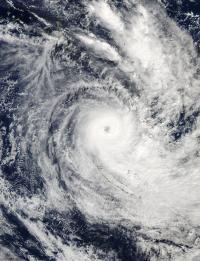 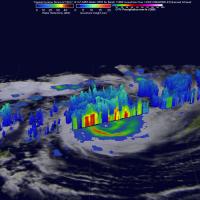