During the Antarctic summer of 2013-2014, a team of researchers released a series of translucent scientific balloons, one by one. The miniature membranous balloons - part of the Balloon Array for Radiation-belt Relativistic Electron Losses, or BARREL, campaign - floated above the icy terrain for several weeks each, diligently documenting the rain of electrons falling into the atmosphere from Earth's magnetic field.

Then in January 2014, BARREL's observations saw something never seen before. During a fairly common space event called a solar storm - when a cloud of strongly magnetic solar material collides with Earth's magnetic field - BARREL mapped for the first time how the storm caused Earth's magnetic field to shift and move. The fields' configuration shifted much faster than expected: on the order of minutes. These results were published in the Journal of Geophysical Research on May 12, 2016. Understanding how our near-Earth space environment changes in response to solar storms helps us protect our technology in space.

During this solar storm, three BARREL balloons were flying through parts of Earth's magnetic field that directly connect a region of Antarctica to Earth's north magnetic pole - these parts of the magnetic field are called closed field lines, because both ends are rooted on Earth. One BARREL balloon was on a field line with one end on Earth and one end connected to the sun's magnetic field, an open field line. And two balloons switched back and forth between closed and open field lines throughout the solar storm, providing a map of how the boundary between open and closed field lines moved as a result of the storm.

"It's very difficult to model that open-closed boundary," said Alexa Halford, a space scientist at NASA's Goddard Space Flight Center in Greenbelt, Maryland. "This will help with our simulations of how magnetic fields change around Earth, because we're able to state exactly where we saw this boundary."

We live in the extended atmosphere of a magnetically active star - which, in part, means that we're constantly in the path of the sun's outflow of charged particles, called the solar wind.

But a smaller portion of Earth's magnetic field is open, connecting to the sun's magnetic field, instead of curving back toward Earth. It's this open magnetic field that gives charged particles from the sun a path into Earth's atmosphere. Once particles are stuck to an open field line, they can rocket down into the upper atmosphere to collide with neutral atoms, creating a type of aurora.

Scientists have known that the open-closed boundary moves, but it's hard to pinpoint exactly how, when, and how quickly it changes - and that's where BARREL comes in. The six BARREL balloons flying during the January 2014 solar storm were able to map these changes, and they found something surprising - the open-closed boundary moves relatively quickly, changing location within minutes.

BARREL was designed to study how electrons from Earth's radiation belts - vast swaths of particles trapped in Earth's magnetic field hundreds of miles above the surface - can make their way down into the atmosphere. The BARREL campaign is primarily tasked with supplementing observations by NASA's Van Allen Probes, which are dedicated to studying these radiation belts. However, solar energetic electrons happen to be in the same energy range as those radiation belt electrons, meaning that BARREL can see both.

The Antarctic is dotted with ground-based systems that, like BARREL, can measure the influx of radiation belt electrons. But because of their design, these detectors are overwhelmed by solar protons - which generally far outnumber solar electrons during solar particle events - meaning they're unable to differentiate between the particles that come from the sun versus those that come from the radiation belts. On the other hand, BARREL is finely tuned to see electrons, meaning that the accompanying barrage of solar protons doesn't drown out the electrons in BARREL's detectors.

"Protons create signatures in a very small energy range, while electron signatures show up in a wide range of energies," said Halford. "But the electron energies are usually well below the proton energy, so we can tell them apart."

It is possible - but unlikely - that complex dynamics in the magnetosphere gave the appearance that the BARREL balloons were dancing along this open-closed boundary. If a very fast magnetic wave was sending radiation belt electrons down into the atmosphere in short, stuttering bursts, it could appear that the balloons were switching between open and closed magnetic field lines.

However, the particle counts measured by the two balloons on the open-closed boundary matched up to those observed by the other BARREL balloons - hovering on closed or open field lines only - strengthening the case that BARREL's balloons were actually crossing the boundary between solar and terrestrial magnetic field. 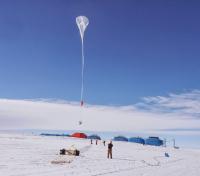 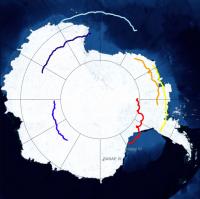