For the first time, Australian scientists have shown that environmental DNA (eDNA) can be used to detect the presence of an endangered bird species simply by collecting a cupful of water from the pools where they drink.

eDNA has emerged as powerful tool to trace rare and threatened aquatic species but its application in the detection of threatened terrestrial species is still largely untested. Researchers from Charles Darwin University, The University of Western Australia, and the Northern Territory's Department of Environment and Natural Resources (DENR) have developed a genetic probe that targets and identifies the eDNA of the endangered Gouldian finch (Erythrura gouldiae), a rainbow-coloured grassfinch endemic to the savanna woodlands of northern Australia.

"When it worked in the real world at the waterholes, even where the water was poor quality in places - where it was hot and looked a bit oily - we were really excited" says Professor Karen Gibb of Charles Darwin University, who led the study funded by the Australian Government's National Environmental Science Program.

The eDNA test has the potential to increase our knowledge of the distribution and habitat use of Gouldian finches; essential information to guide land management decisions that will assist the recovery of wild populations.

Gouldian finches were once found in their thousands from the Kimberley region of Western Australia across to Cape York Peninsula in Queensland. The expansion of pastoralism in the first half of the 20th century and changes in the timing and intensity of fires has been linked to the historical decline in the numbers of Gouldian finches, most likely owing to the reduced availability of the grass seeds that form the major part of their diet. Because the finches are found in small groups across the vast, remote and sparsely populated north of Australia, researchers can't always predict where they need to be and when they need to be there to encounter the birds. This makes it difficult to track changes in the numbers of Gouldian finches from year to year.

Yet there is one aspect of their behaviour that researchers can predict: the granivorous Gouldian finches need to drink water each day. As the northern dry season progresses, suitable waterholes become smaller and rarer. The burst of concentrated activity as flocks of finches drink from shrinking waterholes meant they were likely to shed traceable amounts of their DNA into the water.

The researchers developed a two-in-one eDNA test that uses a PCR primer to amplify a fragment of mitochondrial DNA found in estrildid finches and a species-specific probe to detect Gouldian finch DNA. Gouldian finches often drink at waterholes in mixed flocks with masked finches (Poephila personata) and long-tailed finches (P. acuticauda), which are also members of the estrildid family of finches.

"It's a much more accurate test," Professor Gibb says. "By having primers that pick-up other finches it tells us that the eDNA is good enough quality to be amplified. If the Gouldian test is then negative we can be confident that the eDNA test worked, but there just weren't Gouldian finches at that site."

The study, published in Endangered Species Research, showed that Gouldian finch eDNA could be reliably detected from a 200 mL water sample collected from waterholes visited by the birds in the previous 48 hours. At waterholes with the highest number of birds, Gouldian finch DNA was still detectable 14 days after sample collection, regardless of whether the sample was stored at room temperature or refrigerated. A more comprehensive field trial, where protocols for sampling, storage and the eDNA test will be refined, is currently underway.

Having a reliable and accurate eDNA test for Gouldian finches means that Indigenous Rangers and other land managers, as well as scientists, could collect water samples as they move across the landscape undertaking other activities.

"People who are travelling around will be able to put a cup of water into an appropriate container and then into a car fridge, and be able to take a lot of samples," Professor Gibb says. "We can cover a much larger area."

eDNA reveals where endangered birds of a feather flock together 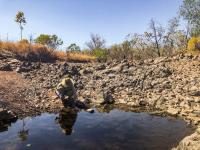