Protected areas are considered the most important tool for curbing the ongoing biodiversity loss, but a lack of field data hampers efforts to measure how effective they are in practice. Scientists have now used records collated by thousands of citizens to show that protected areas are contributing significantly to the conservation of rare and threatened birds across tropical forests hotspots, by preventing deforestation and forest degradation.

To measure the effect of protected areas, researchers needed to contrast field observations inside protected areas with those from similar but unprotected sites. They focused on eight regions classified as global biodiversity hotspots, that is, with very high levels of unique biodiversity but which have already lost most of their native habitat. "Regions of the world with the most threatened biodiversity are precisely the ones where we need effective protected areas the most," stated Victor Cazalis, of the University of Montpellier and lead author of the study. "Unfortunately, these regions often lack the biodiversity data needed to evaluate how good their protected areas are".

New citizen science initiatives are filling this data gap. The research team analysed records from eBird, the world's largest citizen science platform for biodiversity. Already including hundreds of millions of bird observations, collected by contributors ranging from amateur bird enthusiasts to skilled ornithologists, eBirds' coverage of tropical regions has expanded rapidly in the past decade. After carefully filtering these data to select the most robust observations, the analyses focused on over 2.6 million observations of 5,400 bird species, made by nearly 7,000 observers.

The results, published in the scientific journal Nature Communications, show that protection has a clear positive effect on the conservation prospects of bird species. "We found that protected areas are particularly effective at conserving species that have small ranges, are at risk of extinction, or that are specialised in forest habitats", Cazalis noted, "which is very good news as these are the species most in need of conservation". The study also shows that protected areas achieve these positive outcomes both by preventing deforestation, and by retaining the quality of the remaining forest habitats.

"Our findings confirm that protected areas are an effective tool for preventing biodiversity declines", said Ana Rodrigues, of the French National Center for Scientific Research and a co-author in the study, "so we need to continue investing in expanding their coverage and ensuring their adequate management". These results are timely, as governments are now negotiating global conservation targets as part of the post-2020 Biodiversity Framework, due to be adopted in 2021 at the fifteenth Conference of the Parties to the Convention on Biological Diversity. 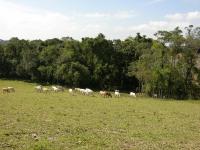 Cattle ranching at the edge of tropical forest remnants in the State of S&atilde;o Paulo, Brazil