New research, led by the Monterey Bay Aquarium, illustrates the disparity between the narrow origins and far-reaching impacts of greenhouse emissions responsible for disrupting the global climate system. Published in Science Advances today, the study was built upon the most comprehensive accounting of global emissions from the burning of fossil fuels. It reveals that the regions generating the most emissions are different from those expected to suffer the most severe warming. The result of this comparison shows the fundamental disparities - quite literally putting them on the map - associated with where, and who, will experience the greatest impacts of climate change.

"One of the dirty tricks of climate change is that local pollution has far-reaching consequences," says former Aquarium Chief Scientist Dr. Kyle Van Houtan, who led the study during his tenure. "When we burn fossil fuels like coal, oil, and gas locally, we mix them in the experimental chamber pot of our planet's atmosphere. The result is that their warming impacts are often exported to far away locations."

The study reinforces that, while people living near refinery, drilling, and manufacturing facilities experience localized health and environmental impacts, emissions from a relatively small area are raising temperatures in communities and ecosystems around the world.

To reach these conclusions, the study charts discharges of the top four heat-trapping agents, which make up 92 percent of all greenhouse emissions, from 1970 to 2018: carbon dioxide (CO2), methane (CH4), nitrous oxide (N2O) and black carbon (sometimes referred to as PM2.5). The authors compared the sources of those emissions to global temperature projections over the entire surface of the planet.

They confirmed that, while the source of emissions causing climate change are concentrated, the impacts are widespread. Remarkably, 90 percent of all greenhouse emissions are generated from human activities across eight percent of Earth's surface area -- yet more than half of Earth's landmass will experience extreme warming by the end of the 21st century.

The study also mapped the economic disparities that are inherent with climate change. The researchers showed how more developed and industrialized regions such as western Europe, northeastern North America and the Arabian gulf states emit more extreme amounts of heat-trapping emissions but will experience relatively fewer climate impacts. Countries in Africa and across Central Asia, which produce some of the lowest amounts of these emissions, will experience the most disruption from the impacts of burning of fossil fuels.

The disparities illustrated on the global map can also be found within individual countries. For example, most greenhouse emissions within the United States originate in the more industrialized northeastern region (New Jersey, Connecticut, Pennsylvania). Warming, though, is more likely to happen in the west -- most notably in Alaska, South Dakota, Idaho, and Montana.

This study helps visualize the outsized role the ocean plays in absorbing emissions-driven warming. While it is estimated that the ocean takes in about 93 percent of the excess heat that is a consequence of these emissions, the researchers calculated that over 95 percent of the greenhouse emissions measured originated on land.

In serving this role, the ocean mitigates the worst impacts of climate change for all humankind.

"Our findings offer a stark rendering of what the ocean does for us," says Dr. Van Houtan. "Covering 72 percent of our planet, the global ocean serves as the heart of our climate system, regulating weather patterns and transferring heat and water around the planet. But we can't take the ocean for granted. We need to protect ocean health so that it continues to play this vital role for all people on Earth. We need to focus on drastically reducing greenhouse emissions and adapting to climate impacts so that we can protect and maintain the ecosystem services we all depend on for survival."

Study authors say the warming projections reinforce the urgent need for global collective action to avoid the 1.5 degrees C above pre-industrial levels by the end of the century. It underscores the need for data visualization and science communications to facilitate productive public dialogue about equitable climate solutions. It also highlights the outsized role the ocean plays in mitigating against the worst impacts for all humankind.

"When we listen to the scientific consensus -- and to the people suffering most from climate disruption -- we see that only a broad, international collaboration to stabilize our planet's climate will work," says Dr. Van Houtan. "And by working together today to reduce our reliance on fossil fuels, we can protect the global ocean and living world that sustains all life on Earth." 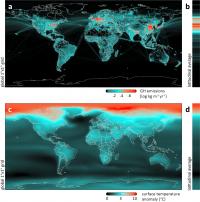 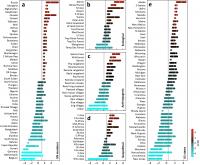