KNOXVILLE, Tenn. - Memorial Day Weekend is heralded the nation over as the unofficial start to summer. Schools have dismissed for the academic year, or soon will. The weather has warmed, and outdoor recreation will soon peak. So, it's timely that a new, detailed study conducted by the University of Tennessee Institute of Agriculture has quantified the economic value of outdoor recreation, at least along the Tennessee Valley Authority's managed river system.

The study, which was performed by a team of scientists from the UTIA departments of Forestry, Wildlife and Fisheries and Agricultural and Resource Economics, determined that the combination of aquatic recreation and waterfront property along the Tennessee Valley Authority's managed river system creates $11.9 billion of annual economic impact to the region -- the equivalent of $1 million per shoreline mile.

In addition, the TVA-supported study found that TVA's 49 reservoirs support about 130,000 jobs annually.

To reach these conclusions, UTIA researchers conducted in-depth surveys of visitors and property owners along three of TVA's 49 reservoirs -- Norris, Watts Bar and Chickamauga -- during Summer 2016. Those reservoirs were chosen to represent urban, rural and tributary reservoir classifications. From that cross-section, the survey data was then extrapolated to cover the entire river system.

"Since its beginnings 84 years ago, TVA's mission has been to improve the lives of those in the Valley, and our integrated river management system is one of the cornerstones of our efforts," said Mike Skaggs, TVA Executive Vice President of Operations. Skaggs, other TVA officials, and representatives from UTIA unveiled the study results earlier this month as the agency kicked off a series of visits with civic officials and media from communities along the river system. "The UTIA study clearly establishes a strong link between the recreational opportunities our reservoirs create and improving the economic opportunities for the nine million people we serve every day," Skaggs added.

First developed to provide flood control, navigation and hydroelectric power, TVA's integrated development plan for the Tennessee River and its tributaries also provides boating, swimming, and fishing enthusiasts their choice of unique destinations across all seven states in its service area.

Poudyal, who specializes in the study of the human dimensions of natural resource policy, notes that TVA reservoirs provide tremendous outdoor opportunities to local and non-local visitors and visitors find their overall experiences highly satisfying. "Considering all the amenities that TVA reservoirs offer, the level of satisfaction among recreational users was relatively high - 75 percent," he said.

Based on expenditures, the UTIA economists agreed. English remarked, "The study found that recreational visitors to the TVA reservoir system generate an average annual economic impact of $11.9 billion as well as more than 130,000 local jobs, $4.45 billion in labor income and $916 million in state and local taxes." English further remarked that the study did not take every economic impact into consideration.

The positive contributions of recreation along the river system are in addition to TVA's more formal economic development activities and partnerships, which contributed to more than $8 billion of capital investment and the creation or retention of more than 72,000 jobs in the Tennessee Valley last year alone.

The Tennessee Valley Authority is a corporate agency of the United States that provides electricity for business customers and local power distributors serving more than 9 million people in parts of seven southeastern states. TVA receives no taxpayer funding, deriving virtually all of its revenues from sales of electricity. In addition to operating and investing its revenues in its electric system, TVA provides flood control, navigation and land management for the Tennessee River system and assists local power companies and state and local governments with economic development and job creation. 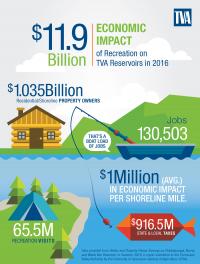 Schematic of Economic Impact of Recreation on TVA Reservoirs, 2016