Long-lost paintings have been discovered on the walls of Cambodia's ancient Angkor Wat temple, thanks to the keen observations of an Australian National University (ANU) researcher.

The ancient paintings date back almost 500 years and depict deities, animals, boats and the temple itself, giving historians a new understanding of life in a relatively unknown period of Cambodia's history.

Rock art researcher Noel Hidalgo Tan discovered the hidden images while working as a volunteer at an archaeological excavation in Angkor Wat during a university break in 2010.

"I was walking through the temple on a lunch break and I saw some pigments on the wall. I took some pictures, but didn't think they would be anything special," he said.

It was only when Tan enhanced the images on his computer that the paintings emerged, revealing the long-lost artworks.

"It was an amazing moment," Tan said. "I didn't expect the images would be so elaborate and detailed."

Angkor Wat is one of the world's most famous monuments and a national symbol of Cambodia. Built in the 12th century, Angkor Wat was in the centre of the city of Angkor, which was the capital of the Khmer Empire from the 9th to the 15th centuries.

The world-heritage site attracts around two million tourists a year.

Despite the large number of visitors, the paintings had not been noticed. They were largely faded to the naked eye, and many were in dark areas of the temple.

Tan, from the ANU Department of Archaeology and Natural History, returned to the temple in 2012 to carry out a detailed investigation in collaboration with Cambodian researchers Im Sokrithy, Heng Than and Khieu Chan.

Remnants of paintings were originally thought to be graffiti left by early travellers to the temple. But to Tan's surprise, many of the paintings portrayed elaborate details of daily life, with little resemblance to other documented graffiti images.

The team suggests that the paintings seem to come from the 16th century reign of King Ang Chan, who commissioned a restoration of the temple to Theravada Buddhist use from a Vishnavaite Hindu temple.

Results of Tan's research are published in the latest edition of the UK journal Antiquity. 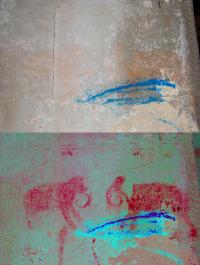 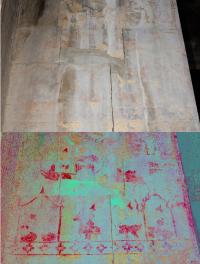