WEST LAFAYETTE, Ind. - Engineers at Purdue University have developed a tiny "micro-pump" cooling device small enough to fit on a computer chip that circulates coolant through channels etched into the chip.

Innovative cooling systems will be needed for future computer chips that will generate more heat than current technology, and this extra heating could damage electronic devices or hinder performance, said Suresh Garimella, a professor of mechanical engineering.

The new device has been integrated onto a silicon chip that is about 1 centimeter square, or roughly one-sixth of a square inch. The technology is an example of a microelectromechanical system, or MEMS, a tiny mechanical device fabricated using methods generally associated with microelectronics.

"Because it's a MEMS pump, we were able to integrate the entire cooling system right onto a chip," Garimella said. "The most innovative part of the technology is the micro-pump."

An article about the cooling device will appear in the May issue of Electronics Cooling magazine. The article was written by doctoral student Brian D. Iverson, Garimella and former doctoral student Vishal Singhal, who recently graduated and co-founded Thorrn Micro Technologies Inc., in Redwood City, Calif.

Chips in today's computers are cooled primarily with an assembly containing conventional fans and "heat sinks," or metal plates containing fins to dissipate heat. But because chips a decade from now will likely contain upwards of 100 times more transistors and other devices, they will generate far more heat than chips currently in use, Garimella said.

"Our goal is to develop advanced cooling systems that are self-contained on chips and are capable of handling the more extreme heating in future chips," said Garimella, director of Purdue's Cooling Technologies Research Center. The center, supported by the National Science Foundation, industry and Purdue, was formed to help corporations develop miniature cooling technologies for a wide range of applications, from electronics and computers to telecommunications and advanced aircraft.

The prototype chip contains numerous water-filled micro-channels, grooves about 100 microns wide, or about the width of a human hair. The channels are covered with a series of hundreds of electrodes, electronic devices that receive varying voltage pulses in such a way that a traveling electric field is created in each channel. The traveling field creates ions, or electrically charged atoms and molecules, which are dragged along by the moving field.

"Say every sixth electrode receives the same voltage, these varying voltages from one electrode to the next produce a traveling electrical field that pulls the ions forward, causing the water to flow and inducing a cooling action," Garimella said. "Essentially, you are pumping fluid forward."

This pumping action is created by a phenomenon called electrohydrodynamics, which uses the interactions of ions and electric fields to cause fluid to flow.

"Engineers have been using electrohydrodynamics to move fluids with electric fields for a long time, but it's unusual to be able to do this on the micro-scale as we have demonstrated," Garimella said.

The researchers also have added a feature to boost the force of the pumping action. A thin sheet of piezoelectric material, which expands and contracts in response to an electric current, was glued on top of the cover of the liquid-filled channels.

"This material acts as a diaphragm that deforms up and down when you give it a voltage, causing it to push additional flow through the channels," Garimella said. "We have developed mathematical models that show this piezo action enhances the electrohydrodynamic performance."

The diaphragm has enhanced the pumping action by 13 percent in the current prototype, but the modeling indicates a possible enhancement of 100 percent or greater, he said.

"Although electrohydrodynamics has generally not been considered practical for pumping applications due to the assumption that it requires a large amount of energy and does not produce enough motive force for thrust, the method has been shown to be far more efficient for micro-cooling applications," Garimella said. "We have shown that the power input required is in the microwatts, but you can get milliwatts of cooling. In other words, the cooling effect is more than a thousand times greater than the energy needed to drive the system. That's because all we need to do is create enough of a flow to induce cooling."

"One big challenge is further developing mathematical models that are comprehensive and accurate because this is a very complicated, dynamic system," Garimella said. "You've got fluid flow on a micro-scale, you've got electrohydrodynamic effects, electrical fields and a moving diaphragm."

Other challenges include sealing the tiny channels to prevent water leakage and designing the system so that it could be manufactured under the same conditions as semiconductor chips.

The work has been funded by the Indiana 21st Century Research and Technology Fund. Garimella is a member of the Birck Nanotechnology Center at Purdue's Discovery Park.

Purdue's Brian D. Iverson, from left, a mechanical engineering doctoral student, and mechanical engineering professor Suresh Garimella use a microscope to examine a disk containing "micro-pump" cooling devices small enough to fit on a computer chip. The tiny pumps circulate water through channels etched into the chip. The technology is an example of a microelectromechanical system, or MEMS, a tiny mechanical device fabricated using methods generally associated with microelectronics. Such innovative cooling systems will be needed for future computer chips because they will generate more heat, which could damage devices or hinder performance. (Purdue News Service photo/David Umberger)

A publication-quality photo is available at http://news.uns.purdue.edu/images/+2006/garimella-micropump.jpg

A publication-quality photo is available at http://news.uns.purdue.edu/images/+2006/garimella-micropump2.jpg

Traditional cooling approaches, consisting typically of external air-cooled heat sinks, are increasingly falling short in meeting the thermal management challenges of emerging electronic systems. Integrated cooling designs are being investigated to eliminate some of the interface contact resistances introduced by add-on heat sinking and to minimize package volume. Forced convective liquid cooling through microchannel heat sinks is among the more promising technologies that have been proposed for achieving very high heat removal rates; critically, this technology is amenable to on-chip integration. However, the pressure heads encountered in microchannel heat sinks can be very high and require the use of a sizeable external pump to drive the flow. Conventional rotary pumps are unsuitable for this purpose due to their large size and power consumption, especially for personal computers and mobile electronic devices. In response to this critical need, novel pumping strategies, which have been miniaturized to sub-millimeter dimensions, have been developed in the last two decades. These "micropumps" offer significant advantages for future electronics cooling applications, as they are much smaller in size than conventional pumps and can be potentially integrated into the microchannels. 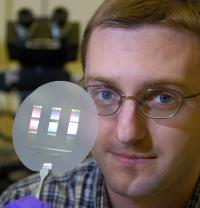