The storms, which consist of brightenings and broadenings of the dawn flank of an oval of auroral activity that encircles Jupiter's poles, evolve in a pattern surprisingly reminiscent of familiar surges in the aurora that undulate across Earth's polar skies, called auroral substorms, according to the authors.

The new study is the first to track the storms from their birth on the nightside of the giant planet through their full evolution. It was published today in AGU Advances, AGU's journal for high-impact, short-format reports with immediate implications spanning all Earth and space sciences.

During a dawn storm, Jupiter's quiet and regular auroral arc transforms into a complex and intensely bright auroral feature. It emits hundreds to thousands of Gigawatts of ultraviolet light into space as it rotates from the night side to the dawn side and ultimately to the day side of the planet over the course of 5-10 hours. A Gigawatt is the power produced by a typical modern nuclear reactor. This colossal brightness implies that at least ten times more energy was transferred from the magnetosphere to the upper atmosphere of Jupiter.

Previously, dawn storms had only been observed from ground-based telescopes on Earth or the Hubble Space Telescope, which can only offer side views of the aurora and cannot see the night side of the planet. Juno revolves around Jupiter every 53 days along a highly elongated orbit that brings it right above the poles every orbit.

"This is a real game changer," said Bertrand Bonfond, a researcher from the University of Liège and lead author of the new study. "We finally got to find out what was happening on the night side, where the dawn storms are born."

The new study found the timing of the dawn storms on Jupiter did not correlate with solar wind fluctuations. Jupiter's magnetosphere is mostly populated by particles escaping from its volcanic moon Io, which then get ionized and trapped around the planet by its magnetic field.

The sources of mass and energy fundamentally differ between these two magnetospheres, leading to auroras that usually look quite different. However, the dawn storms, as unraveled by Juno's ultraviolet spectrograph, looked familiar to the researchers.

"When we looked at the whole dawn storm sequence, we couldn't help but notice that the dawn storm auroras at Jupiter are very similar to a type of terrestrial auroras called substorms" said Zhonghua Yao, co-author of the study and scientific collaborator at the University of Liège.

These findings demonstrate that, whatever their sources, particles and energy do not always circulate smoothly in planetary magnetospheres. They often accumulate until the magnetospheres collapse and generate substorm-like responses in the planetary aurorae.

"Even if their engine is different, showing for the first time the link between these two very different systems allows us to identify the universal phenomena from the peculiarities specific to each planet," Bonfond said. 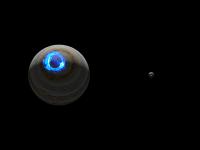 Evolution of a dawn storm in Jupiter's polar auroras.