DURHAM, N.C. -- From eyes the size of basketballs to appendages that blink and glow, deep-sea dwellers have developed some strange features to help them survive their cold, dark habitat.

But with one normal eye and one giant, bulging, yellow eye, the "cockeyed" squid Histioteuthis heteropsis has perhaps the strangest visage of all.

"You can't look at one and not wonder what's going on with them," said Duke University biologist Kate Thomas.

These observations, combined with visual simulations, indicate that the large eye is specifically adapted for gazing upwards, searching for shadows of fellow sea creatures against the rapidly fading sunlight, while the small eye is adapted for gazing downwards, scanning deeper, darker water for flashes of bioluminescence.

The results are published online Feb. 13 in a special issue of the journal Philosophical Transactions B.

Also known as the strawberry squid for its bright pink color and smattering of seed-shaped photophores, Histioteuthis lives in a region of the ocean known as the mesopelagic or "twilight" zone, 200 to 1000 meters below the surface.

What meager light reaches these depths is extremely dim, a monochromatic blue, and travels straight down from above. Often, the bioluminescent flashes of other sea creatures -- which could signal danger or potential prey -- are brighter than the ambient sunlight.

Since their discovery over a century ago, cockeyed squids' mismatched eyes have puzzled biologists.

To gain insight into their behavior, Thomas, a graduate student in Johnsen's lab and lead author on the paper, combed through 30 years of videos collected by MBARI's remotely operated vehicles (ROVs), which documented 152 sightings of Histioteuthis heteropsis and nine sightings of its similar but rarer cousin, Stigmatoteuthis dofleini.

Using visual simulations, Thomas showed that, because the sunlight only comes from directly above, it would be nearly impossible for an eye angled downwards to spot silhouettes against the ambient light. Similarly, while increasing the size of an upward-facing eye a small amount greatly improves its sensitivity to dim sunlight, increasing the size of a downward-facing eye has little impact on its ability to spot bioluminescent flashes against a dark background.

"The eye looking down really only can look for bioluminescence," Johnsen said. "There is no way it is able to pick out shapes against the ambient light. And once it is looking for bioluminescence, it doesn't really need to be particularly big, so it can actually shrivel up a little bit over generations. But the eye looking up actually does benefit from getting a bit bigger."

Sporting two gigantic eyes may seem like the ultimate strategy for surviving the deep dark sea. But where resources are sparse, the cockeyed squid may have stumbled upon an ingenious solution to an ocular conundrum, Thomas said.

"Eyes are really expensive to make and maintain," Thomas said. "You want eyes just big enough to do what you need to do, but you don't want to have any bigger eyes because then you are just wasting resources." 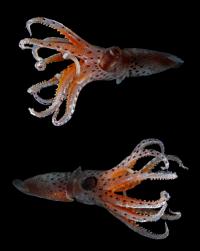