The Sloan Digital Sky Survey (SDSS) uses a 2.5-meter telescope with a wider field of view than any other large telescope, located on a mountaintop in New Mexico called Apache Point and devoted solely to mapping the universe. We now know that some three-quarters of the universe consists of dark energy, whose very existence was unsuspected when telescope construction began in 1994 and still controversial when the first Sloan survey started in 2000.

Investigating dark energy has since emerged as one of the most crucial tasks of the SDSS. SDSS-III, the third major mapping program, started in midsummer 2008, with the biggest of its four component surveys being a dark-energy probe called BOSS, the Baryon Oscillation Spectroscopic Survey.

Astrophysicist David Schlegel, since 2004 a member of the Physics Division at the U.S. Department of Energy's Lawrence Berkeley National Laboratory, is the principal investigator of BOSS; formerly of Princeton University, Schlegel has been part of the SDSS team since its beginning.

"To tell the truth, the first time I heard about dark energy I was skeptical," Schlegel says.

The evidence came from studies, pioneered by the Supernova Cosmology Project based at Berkeley Lab, comparing the brightness and redshift of distant Type Ia supernovae. The results showed that the expansion of the universe was accelerating, driven by something which, being unknown, was soon tagged with the label dark energy.

Schlegel was soon won over, however, and immediately realized that the Sloan telescope, "which has an enormous field of view," could be used for quite a different kind of dark energy measurement, one completely independent of supernova studies. Baryon acoustic oscillation is a fancy name for the way galaxies are distributed; their density varies regularly, bunching up roughly every 500 million light years and providing a natural measuring stick or "ruler" for measuring how much the universe has expanded since early in its history.

To use a 500-million-light-year ruler, however, one has to have at least a few billion light years to use it in. The Sloan telescope was custom-designed to take in such an enormous volume of space.

The distribution of visible mass in the universe

"Baryon" (meaning protons and neutrons and other relatively massive particles) is shorthand for ordinary matter. For almost the first 400,000 years, the universe was so dense that particles of matter were thoroughly entangled with particles of light (photons), the whole a vast, quivering, liquid-like blob where density variations caused sound waves (pressure waves) to move spherically outward at over half the speed of light.

Suddenly the expanding universe cooled enough for light and matter to "decouple." Photons shot through transparent space unimpeded; the speed of sound plummeted. What had been variations in the density of the liquid universe left two marks in the now-transparent sky.

Variations in the temperature of the radiation that filled the early universe have descended to us as anisotropies in the cosmic microwave background (CMB). Variations in the density of matter persist in the clustering of galaxies, as baryon acoustic oscillations (BAO). The two scales, the roughly one-degree anisotropy of the CMB and the 500-million-light-year clustering of BAO, are closely related; the standard ruler of the universe measured from BAO can be calculated from the CMB for any epoch since decoupling.

Schlegel and his colleague Nikhil Padmanabhan, who came to Berkeley Lab from Princeton in late 2006, first used the SDSS telescope to complete the largest three-dimensional map of the universe ever made until then: 8,000 square degrees of sky out to a distance of 5.6 billion light years, determining the clustering of 60,000 luminous red galaxies. This program, part of SDSS-II, measured galactic distances to a redshift of z = 0.35 and detected the 500-million-light-year scale of BAO.

"We were mostly excited that we could make a measurement," Schlegel says. "We proved we had a ruler we could use."

"With BOSS, we're going from a measurement to a much more precise measurement that we can use to constrain dark energy," says Padmanabhan.

BOSS will double the volume of space in which red luminous galaxies will be studied, observing 10,000 square degrees of sky out to redshifts of z = 0.7; the galaxy sample will increase from 60,000 to 1.5 million. BOSS will also include a new kind of object, measuring up to 200,000 quasars at even more extreme redshifts of z = 2 or more.

"The epoch of the most common quasars was at redshifts between 2 and 3," Schlegel says, "just enough that we can still see them at optical wavelengths in the blue and ultraviolet; in this respect, nature was kind to us. BOSS will be the first look at dark energy at these redshifts. Only a few Type Ia supernovae have been found beyond redshift 1."

Galaxies and quasars provide different ways to measure the expansion of the universe using baryon acoustic oscillation. The angle of separation among galaxies across the sky and the distance of their separation along the line of sight (at different redshifts) shows how much the BAO cosmic ruler has changed since baryons and photons decoupled.

Quasars allow a look at a different kind of baryonic oscillation from the distribution of galaxies, that of the varying density of the gas in the universe, which can be probed at hundreds of points along the line of sight to each quasar.

The measured spectrum of an individual quasar is conditioned by the absorption of its light by clouds of hydrogen gas between the quasar and the viewer. "If the universe were empty, the spectra would be featureless," Schlegel says. "We are using the quasars as a backlight to measure hydrogen absorption."

Because the CMB precisely locks in the value of BAO at the moment on decoupling – equivalent to a redshift z = 1,089 – it greatly leverages the accuracy of baryon acoustic oscillations at much more recent epochs and lower redshifts. Padmanabham says that "BOSS will be within a factor of 2 of the best possible map of BAO in the universe."

Schlegel adds, "No one will repeat this experiment."

What it will take

Good as the Sloan telescope is, BOSS will require some major improvements in instrumentation, to be carried out under the direction of Berkeley Lab physicist Natalie Roe. The first task is to increase the number of objects that can be measured with each exposure.

Objects to be included in the survey (galaxies or quasars) are first chosen and located from previous photos. A hole is drilled in a metal "plug plate," a mask to reduce ambient light. An optical fiber is plugged into each hole to carry the light from the object directly to the CCDs. The diameter, separation, and other characteristics of the fibers put a limit on how many can be used at once. At present the limit is 640; BOSS will increase that number to 1,000 fibers with improved optics, allowing more objects and less sky contamination in each exposure.

Higher redshifts call for CCDs with better sensitivity to the red and near-infrared end of the spectrum. The Berkeley Lab high-resistance CCD, descended from silicon detectors used in high-energy physics, is particularly suited to this purpose and is integral to the Lab's proposed SuperNova/Acceleration Probe (SNAP) satellite, the inspiration and leading contender for the NASA/DOE Joint Dark Energy Mission (JDEM). SNAP will study both supernovae and "weak lensing" (a third approach to measuring dark energy). BOSS will use the same rugged, highly red-sensitive CCDs to study luminous red galaxies.

BAO and supernovae are two highly complementary ways of approaching the wide-open questions of dark energy – for example, whether dark energy has been constant or variable over time, or even whether it may be illusory, with its most obvious effect, the accelerating expansion of the universe, resulting instead from some unperceived flaw in Einstein's General Theory of Relativity. Although BAO and supernova studies are both purely geometric, they are independent.

To study expansion using distant Type Ia supernova, scientists must determine their brightness as measured against "nearby" Type Ias. Baryon oscillation studies do almost the reverse, measuring the expansion of the universe by calibrating the dimensions of the BAO cosmic ruler, seen in relatively nearby objects, against the scale that was frozen in when the universe was less than 400,000 years old. BOSS will be able to determine BAO with an accuracy approaching one percent, one of the most precise possible measurements of the expansion of the universe.

In addition to Berkeley Lab's Schlegel, Padmanabhan, Roe, and survey scientist Martin White of Lawrence Berkeley National Laboratory and the University of California at Berkeley, the BOSS team includes Daniel Eisenstein of the University of Arizona and Daniel Weinberg of Ohio State University.

BOSS is supported by the Sloan Foundation, by more than 20 institutions who are Participating Members of the Sloan Digital Sky Survey managed by the Astrophysical Research Consortium, and by the U.S. Department of Energy and the National Science Foundation.

Berkeley Lab is a U.S. Department of Energy national laboratory located in Berkeley, California. It conducts unclassified scientific research and is managed by the University of California. Visit our website at http://www.lbl.gov. 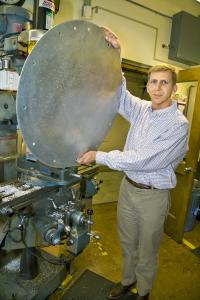