The first data received from the Hayabusa2 spacecraft in orbit of asteroid Ryugu helps space scientists explore conditions in the early solar system. The space probe gathered vast amounts of images and other data which gives researchers clues about Ryugu's history, such as how it may have formed from a larger parent body. These details in turn allow researchers to better estimate quantities and types of materials essential for life that were present as Earth formed.

"The ground shook. My heart pounded. The clock counted. 3... 2... 1... Liftoff!" regaled Professor Seiji Sugita of the University of Tokyo's Department of Earth and Planetary Science. "I've never felt so excited and nervous at the same time, that wasn't just another science experiment on top of that rocket. That was the culmination of my life's work and the hopes and dreams of my entire team."

On Wednesday, 3rd December 2014, an orange and white rocket over 50m tall weighing almost 300 tons launched from Tanegashima Space Center in South West Japan and successfully sent the Hayabusa2 spacecraft hurtling into space. Its carefully calculated trajectory swung Hayabusa2 round the Earth to pick up speed so it could reach its destination in the asteroid belt between Mars and Jupiter. The target was the asteroid Ryugu and Hayabusa2 arrived on schedule on Wednesday 27th June 2018.

Since then the spacecraft has used a wide range of cameras and instruments to collect images and data about Ryugu which it continually sends to researchers back on Earth. It has even made a brief soft landing in preparation for a second where it will collect loose surface material -- regolith -- to return to Earth. We'll have to wait until 2020 before that sample returns, but researchers are far from idle in the meantime.

"Just a few months after we received the first data we have already made some tantalising discoveries," said Sugita. "The primary one being the amount of water, or lack of it, Ryugu seems to possess. It's far dryer than we expected, and given Ryugu is quite young (by asteroid standards) at around 100 million years old, this suggests its parent body was much largely devoid of water too."

According to colleagues of Sugita writing in a companion paper, various instruments on Hayabusa2 including a visible-light camera and a near-infrared spectrometer confirm the lack of water. This fact is important as it's thought all of Earth's water, including that comprising 70% of you, came from local asteroids, distant comets and the nebula or dust cloud that became our sun. The presence of dry asteroids in the asteroid belt would change models used to describe the chemical composition of the early solar system. But why does this matter?

But there's more to this than water; other compounds crucial to life exist in asteroids and Ryugu has some surprises here too. To understand why, it's important to know that Hayabusa2 is not the only terrestrial robot out there exploring asteroids right now. In 2016 NASA launched OSIRIS-REx which arrived at its target asteroid Bennu on 3rd December 2018, four years to the day from the launch of Hayabusa2.

The two projects are not in competition but actively share information and data which could help one another. Researchers compare their asteroids to learn even more than would be possible if they could only probe one. Although alike in most ways, Bennu and Ryugu differ significantly in some areas. They are both extremely dark, have spinning-top-like shapes and are covered in large boulders, but Ryugu contains far less water. This discrepancy has researchers scratching their heads.

"I hoped the surface of Ryugu had more variety as previous ground-based observations had suggested. But every surface feature and boulder on Ryugu seems to be like every other, showing the same scarcity of water," said Sugita. "However, what felt limiting is now enlightening; Ryugu's homogeneity demonstrates the capacity of our instruments to capture nuanced data. It also serves as a necessary constant to compare subsequent data against. So much of science is about controlling variables and Ryugu does this for us."

As Hayabusa2 continues to explore our little rocky neighbour researchers gradually piece together its history, which is entwined with our own. Sugita and his colleagues believe Ryugu comes from a parent asteroid several tens of kilometers wide, most likely in the asteroid families Polana or Eulalia.

"Thanks to the parallel missions of Hayabusa2 and OSIRIS-REx, we can finally address the question of how these two asteroids came to be," concludes Sugita. "That Bennu and Ryugu may be siblings yet exhibit some strikingly different traits implies there must be many exciting and mysterious astronomical processes we have yet to explore." 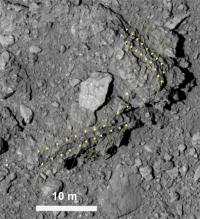 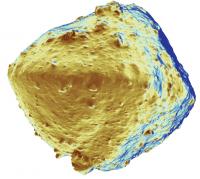