ITHACA, N.Y. - A team of scientists led by Cornell University Earth and Atmospheric Sciences researcher Michael Willis, has published a new paper showing for the first time that meltwater from the surface of an ice cap in northeastern Greenland can make its way beneath the ice and become trapped, refilling a subglacial lake. This meltwater provides heat to the bottom of the ice sheet.

These groundbreaking findings provide new information about atmospheric warming and its affect on the critical zone at the base of the ice. The warmth provided by the water could make the ice sheet move faster and alter how it responds to the changing climate.

The research is detailed in a new paper published online by the journal Nature on Jan. 21. The paper was written by Willis, who is also an adjunct faculty member in the geological sciences department at UNC-Chapel Hill's College of Arts and Sciences, along with co-authors Bradley Herried, Polar Geospatial Center, University of Minnesota; Michael Bevis, School of Earth Sciences at Ohio State University and Robin Bell, Lamont Doherty Earth Observatory at Columbia University.

The direct link between the surface meltwater and the filling of a lake at the base of the ice has never been seen before. Over the last few years the number of lakes on the surface of the Greenland ice sheet has greatly increased. Surface lakes are also occurring much farther inland at higher altitudes than in the past. If this mechanism of transferring water and warmth from the surface lakes to the bottom of the ice sheet is common then the Greenland Ice Sheet is likely to respond more rapidly to climate change than is currently predicted.

The Greenland ice sheet comprises about 80 percent of the land mass of Greenland and previous studies have documented that the ice sheet is melting at a faster rate due to climate change. The movement of meltwater beneath the ice sheet, from the interior to the ocean, is the topic of many investigations as it can control the speed at which the ice sheet moves. This is the first study to document that surface water can penetrate to the bottom of an ice cap and be trapped in place. Researchers say this process could also occur at other large bodies of ice.

The study was sparked in 2012 when Willis was mapping ice changes around the edge of the Greenland Ice Sheet as part of a study funded by U.S. National Science Foundation (NSF) to understand how much of the accelerating ice loss in Greenland is caused by melting and how much is caused by the increase of ice moving into the ocean.

During his research, Willis spotted a 70-meter-deep hole (the equivalent of a 10-story building) that had formed when a subglacial lake, far beneath the ice surface, emptied in the late fall of 2011. Subglacial lakes are rare in Greenland, and the presence of such a lake in the far northeast came as a surprise. The ice in this region is much too slow, too cold and too thin to allow melting beneath the ice cap, which is how a subglacial lake usually forms.

"Each summer scientists see bright blue streams form on the surface of Greenland as warm air melts the ice sheet. What happens to this water when it disappears into cracks in the ice has remained a mystery.

"This discovery that water can be stored in lakes beneath the ice shows how the plumbing on the surface is linked to the plumbing at the base," said co-author Robin Bell.

Willis and the researchers were able to pinpoint when the subglacial lake refilled using data collected from high-resolution satellite images from the University of Minnesota's Polar Geospatial Center, as well as data from NASA's operation IceBridge for calibration and verification.

The Cornell-led team calculated that the lake beneath the ice has filled about half way since its 2011 blowout that originally drove water from the lake at a volume of 215 cubic meters per second (nearly 57,000 gallons--close to the volume of a 30-foot-by-50-foot backyard swimming pool every second.) As the lake refills, the surface meltwater carries stored heat, called latent heat, along with it from the relatively warm atmosphere to the icy depths. This latent heat reduces the stiffness of the surrounding ice and makes the ice more likely to flow out to sea.

Even though researchers have long known of the existence of subglacial lakes, never before have they witnessed any refilling from the surface. The refilling signals to researchers that Greenland's ice loss has likely reached a milestone.

"We can actually see the meltwater pour down into these holes and then watch these subglacial lakes drain out and fill up again in real time. With melting like that, even the deep interior of the ice sheet is going to change. If enough water is pouring down into the Greenland Ice Sheet for us to see the same subglacial lake empty and refill itself over and over, then there must be so much latent heat being released under the ice that we'd have to expect it to change the large-scale behavior of the ice sheet," said study co-author Bevis.

Atmospheric warming heats the bottom of ice sheets, as well as the top 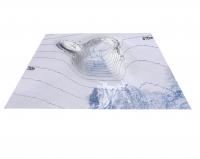 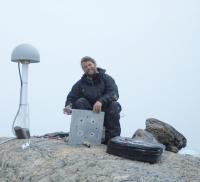