While coral reefs worldwide are suffering severe damage due to global warming and ocean acidification, there is one place in the world where they are surviving these harsh conditions - the Gulf of Aqaba in the Red Sea.

The researchers who discovered this phenomenon are now reporting a new, promising finding: even when parent corals from the Gulf of Aqaba experience increased temperatures and ocean acidification stress during the peak reproductive period, they are not only able to maintain normal physiological function, but also have the same reproductive output and produce offspring that function and survive as well as those which were produced under today's ambient water conditions.

While only one species has been tested for one reproductive cycle so far, this is a success story that shows that corals in the Gulf of Aqaba may persist through climate change, according to Jessica Bellworthy, a doctoral student who carried out the study in the laboratory of Prof. Maoz Fine, of Bar-Ilan University's Mina and Everard Goodman Faculty of Life Sciences, along with scientists from Ecole Polytechnique Fédérale de Lausanne (EPFL). The study was recently published in the Journal of Experimental Biology.

Using a Red Sea Simulator developed in Israel, the researchers tightly manipulated water conditions in Prof. Fine's lab at an 80-aquarium, high-tech facility located at the Interuniversity Institute for Marine Science in Eilat to mimic the ocean under a severe climate change scenario.

"To our surprise but also joy, there were no detected differences in the number or the quality of the offspring produced under ocean acidification and warming scenario compared to the present day ambient control conditions," says Bellworthy.

Previous work in Prof. Fine's lab showing the corals' resistance focused solely on their adult life stages. This led the researchers to investigate the impact of climate change and ocean acidification on the reproductive performance of the adult population and on next generation corals.

"Corals around the world are already suffering mass mortality as a result of anomalously high water temperatures," says Bellworthy. "In the Gulf of Aqaba we have noted a population that withstands thermal stress way beyond what is expected in this century. Furthermore, this study begins to show that this thermal resistance not only applies during the adult life phase but also during the early life stages, which are often considered much more vulnerable and sensitive. This adds support to previous suggestions from our lab and others that the Gulf of Aqaba may be a refuge for corals in the face of climate change."

Over the coming year the researchers plan to run a similar experiment combining global and local harmful factors, such as ocean warming and heavy metal pollution, to investigate how local factors affect the ability of coral reefs to withstand climate change. 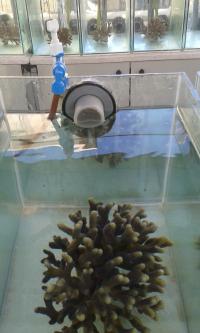