The Magnetospheric Multiscale mission -- MMS -- has spent the past four years using high-resolution instruments to see what no other spacecraft can. Recently, MMS made the first high-resolution measurements of an interplanetary shock.

These shocks, made of particles and electromagnetic waves, are launched by the Sun. They provide ideal test beds for learning about larger universal phenomena, but measuring interplanetary shocks requires being at the right place at the right time. Here is how the MMS spacecraft were able to do just that.

What's in a Shock?

The solar wind typically comes in two types -- slow and fast. When a fast stream of solar wind overtakes a slower stream, it creates a shock wave, just like a boat moving through a river creates a wave. The wave then spreads out across the solar system. On Jan. 8, 2018, MMS was in just the right spot to see one interplanetary shock as it rolled by.

MMS was able to measure the shock thanks to its unprecedentedly fast and high-resolution instruments. One of the instruments aboard MMS is the Fast Plasma Investigation. This suite of instruments can measure ions and electrons around the spacecraft at up to 6 times per second. Since the speeding shock waves can pass the spacecraft in just half a second, this high-speed sampling is essential to catching the shock.

Looking at the data from Jan. 8, the scientists noticed a clump of ions from the solar wind. Shortly after, they saw a second clump of ions, created by ions already in the area that had bounced off the shock as it passed by. Analyzing this second population, the scientists found evidence to support a theory of energy transfer first posed in the 1980s.

MMS consists of four identical spacecraft, which fly in a tight formation that allows for the 3D mapping of space. Since the four MMS spacecraft were separated by only 12 miles at the time of the shock (not hundreds of kilometers as previous spacecraft had been), the scientists could also see small-scale irregular patterns in the shock. The event and results were recently published in the Journal of Geophysical Research.

Going Back for More

Due to timing of the orbit and instruments, MMS is only in place to see interplanetary shocks about once a week, but the scientists are confident that they'll find more. Particularly now, after seeing a strong interplanetary shock, MMS scientists are hoping to be able to spot weaker ones that are much rarer and less well understood. Finding a weaker event could help open up a new regime of shock physics. 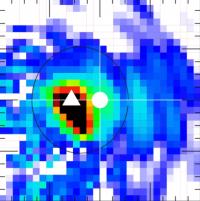