Plants have been used to produce a new vaccine against poliovirus in what is hoped to be a major step towards global eradication of the disease.

A cross-cutting team of scientists, including Dr Johanna Marsian working in Professor George Lomonossoff's Lab at the John Innes Centre, Norwich, has produced the novel vaccine with a method that uses virus-like particles (VLPs) - non-pathogenic mimics of poliovirus which are grown in plants.

Genes that carry information to produce VLPs are infiltrated into the plant tissues. The host plant then reproduces large quantities of them using its own protein expression mechanisms.

Professor Lomonossoff, from the John Innes Centre said: "This is an incredible collaboration involving plant science, animal virology and structural biology. The question for us now is how to scale it up - we don't want to stop at a lab technique."

VLPs look like viruses but are non-infectious. They have been biologically engineered so they do not contain the nucleic acid that allows viruses to replicate. This means that they mimic the behaviour of the virus, stimulating the immune system to respond without causing an infection of poliomyelitis.

Laboratory tests demonstrated that the poliovirus mimics provided animals with immunity from the disease paving the way for human vaccines to be produced by plants on a major scale with the input of pharmaceutical industry collaborators.

The breakthrough was made by a consortium funded by the World Health Organisation (WHO) which is seeking to eradicate a disease that has been known since antiquity.

The WHO is seeking alternative vaccines that avoid use of the live virus as part of an international drive to completely eradicate the virus worldwide.

A global scourge up to the middle of the last century, poliovirus has been reduced by 99 per cent since 1988 due to the Global Polio Eradication Initiative led by the WHO. Current polio vaccines, however, require the production of huge quantities of the virus. Using the live virus not only represents a risk of the virus escaping, the use of the live attenuated (weakened) virus, effectively maintains polio in the global population.

VLPs were expressed at the John Innes Centre using Hypertrans® transient plant expression system which had previously been developed there. This successful development not only holds promise for the production of vaccines for polio: it could become a frontline diagnostic resource in producing vaccines against other viral outbreaks.

"The beauty of this system of growing non-pathogenic virus mimics in plants, is that it boosts our ability to scale-up the production of vaccine candidates to combat emerging threats to human health," said Prof Lomonossoff.

In the past 20 years plants have become serious competitors to bacteria, insect cells, yeast or mammalian cells as production systems for pharmaceutical materials. They are cost-effective requiring simple nutrients, water, carbon-dioxide and sunlight for efficient growth and the transient expression system can be adjusted rapidly with low costs.

The work at the John Innes Centre furthered work of scientists at the University of Leeds, who first discovered a way of producing the virus-like particles (VLP) using the Hypertrans® expression system.

Despite successes of plant-based expression to produce VLPs of papilloma and hepatitis B viruses, poliovirus VLPs had previously proved too unstable to make practical vaccines using this technique. A problem is that the genetic material which causes replication of the virus and which is therefore absent from the VLPs, also has a role in holding the particles together.

However teams from The National Institute for Biological Standards and Control, and the University of Leeds identified mutations within protein coats which enabled the production of VLPs which are sufficiently stable to act as vaccines. Experiments at the University of Oxford showed that these were identical to native poliovirus retaining their shape when warmed, and which are effective in protecting animals against poliovirus.

The team used cryo-electron microscopy at Diamond Light Source's Electron Bio-Imaging Centre (eBIC) to obtain a clear look at the structure of the VLPs. They confirmed the structure and showed that the external features of the particles were identical to those of poliovirus.

Dave Stuart, Director of Life Sciences at Diamond and Professor of Structural Biology at University of Oxford said, "We were inspired by the successful synthetic vaccine for foot-and-mouth disease, also investigated at Diamond as part of UK research collaboration. By using Diamond's visualisation capabilities and the expertise of Oxford University in structural analysis and computer simulation, we were able to visualise something a billion times smaller than a pinhead and further enhance the design atom by atom of the empty shells. Through information gained at Diamond, we also verified that these have essentially the same structure as the native virus to ensure an appropriate immune response."

This collaboration means manufacturing the particles stabilised in plants on a large scale as precursors to vaccines is now much closer to becoming a reality. The results are outlined in the journal Nature communications: Plant-made Polio 3 stabilised VLPs - a candidate synthetic Polio vaccine.

Background information: Poliovirus: the scourge of summers past

An ancient Egyptian stone engraving provides a clue that the poliovirus has been a disturbing blight on our lives since antiquity. The 3,500-year-old engraving appears show a polio victim, a priest with a withered right leg.

From then the virus was widely feared up until the middle of the last century and the arrival of the first effective vaccines. Polio is now down to a few hundred cases a year world-wide, but these numbers remain steady as the virus is maintained in the environment by the use of the live attenuated vaccine.

"The poliovirus is a very nasty disease and certainly until the 1950s was a real scourge." said Professor George Lomonossoff of the John Innes Centre, based at Norwich Research Park.

"It was known as the summer plague and here in Norwich the main source of it was bathing in the river Yare near Earlham Park."

"Most people had very mild symptoms but some people got paralytic polio and in worst cases couldn't breathe properly and had to be put in an iron lung in order to breathe."

Poliovirus is the causative agent of poliomyelitis which destroys motor neurons in the central nervous system causing paralysis or even death. Transmission is primarily by ingesting infected water.

The Global Polio Eradication Initiative led by the World Health Organisation has resulted in 99 per cent fewer cases in the past 30 years by using two highly effective vaccines: the live attenuated (weakened) vaccine developed by Albert Sabin and the formaldehyde-inactivated or killed virus developed by Jonas Salk.

Production of both vaccines, developed in the 1950s, requires propagation of large quantities of live poliovirus increasing the risk of accidental re-introductions.

Because of this risk, the WHO has intensified its search for cheap and viable alternatives, this breakthrough using the virus-like particles presents an exciting new option. Virus free vaccines will allow polio to be eradicated, they will prevent recurrences without the risks associated with the using the live virus vaccines.

1. Plant-made Polio 3 stabilized VLPs ¬- a candidate synthetic Polio vaccine (lead author Johanna Marisan) is published in Nature Communications (embargoed until 10:00am BST on 15th August). On publication the paper will be available at: http://nature.com/articles/doi:10.1038/s41467-017-00090-w

2 The John Innes Centre is an independent, international centre of excellence in plant science and microbiology. Our mission is to generate knowledge of plants and microbes through innovative research, to train scientists for the future, to apply our knowledge of nature's diversity to benefit agriculture, the environment, human health and wellbeing, and engage with policy makers and the public. To achieve these goals we establish pioneering long-term research objectives in plant and microbial science, with a focus on genetics. These objectives include promoting the translation of research through partnerships to develop improved crops and to make new products from microbes and plants for human health and other applications. We also create new approaches, technologies and resources that enable research advances and help industry to make new products. The knowledge, resources and trained researchers we generate help global societies address important challenges including providing sufficient and affordable food, making new products for human health and industrial applications, and developing sustainable bio-based manufacturing.

The John Innes Centre is strategically funded by the Biotechnology and Biological Sciences Research Council (BBSRC).

3. The National Institute for Biological Standards and Control (NIBSC) is a global leader in the standardisation and control of biological medicines, playing a major role in assuring the quality of biological medicines worldwide. NIBSC is a centre of the Medicines and Healthcare products Regulatory Agency which also includes CPRD and MHRA. The Medicines and Healthcare products Regulatory Agency is an executive agency of the Department of Health.

4. The Wellcome Trust Centre for Human Genetics is a research institute of the Nuffield Department of Medicine at the University of Oxford, funded by the University, the Wellcome Trust and numerous other sponsors. It is based in purpose-built laboratories on the University of Oxford's Biomedical Research Campus in Headington, one of the largest concentrations of biomedical expertise in the world. With more than 400 active researchers and around 70 employed in administrative and support roles, the Centre is an international leader in genetics, genomics and structural biology

The Electron Bio-Imaging Centre (eBIC) was established at Diamond following the award of a £15.6 million grant from the Wellcome Trust, the Medical Research Council (MRC) and the Biotechnology and Biological Sciences Research Council (BBSRC). The location of eBIC enables scientists to combine their techniques with many of the other cutting-edge approaches that Diamond offers; whilst a partnership with the University of Oxford allows users to access the Polara, a high-containment cryo-electron microscope. http://www.diamond.ac.uk

6 The University of Leeds is one of the largest higher education institutions in the UK, with more than 33,000 students from 147 different countries, and a member of the Russell Group of research-intensive universities.

Poliovirus -- Scourge of the Ancient World 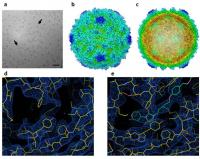