The Institute of Laser Engineering (ILE), Osaka University, has succeeded to reinforce the Petawatt [3] laser "LFEX" to deliver up to 2,000 trillion watts in the duration of one trillionth of one second (this corresponds to 1000 times the integrated electric power consumed in the world). By using this high-power laser, it is now possible to generate all of the high-energy quantum beams (electrons, ions, gamma ray, neutron, positron). Owing to such quantum beams with large current, we can make a big step forward not only for creating new fundamental technologies such as medical applications and non-destructive inspection of social infrastructures to contribute to our future life of longevity, safety, and security, but also for realization of laser fusion energy triggered by fast ignition.

Background and output of research

This high output has been implemented by a 4-beam amplifier technology and the world's highest performance dielectric multilayer diffraction grating of a large diameter. In addition, to bring out the performance of Petawatt laser most effectively, the first rising of the laser pulse [4] should be steep enough. For example, the laser pulse is expected to stand steep in its temporal evolution just as Tokyo Sky Tree stands high to flat, instead of the Tokyo Tower, which spreads the scaffolding to the hilly area. LFEX laser has thus first succeeded to suppress undesirable extra lights (noise), that exist in front of the main pulse, by a factor of ten order of magnitudes compared to the pulse peak (10-digit pulse contrast). The height of the noise is equivalent to the size of the influenza virus to the whole height of the Sky Tree.

Taking all the advanced high-power-laser technologies, we have completed the Petawatt laser "LFEX", that can be now available to study basic science and practical applications even deeper than earlier.

ILE has been promoting a variety of studies using high-power laser is, as a joint use and joint research center. "LFEX laser" enables us to generate high energy pulses of quantum beams with large current, and one can expect such medical applications as particle beam cancer therapy and non-destructive inspection for bridges and etc. (or defect inspection by gamma-ray beam and neutrons).

Furthermore, it is expected that the fast ignition scheme proposed by ILE, Osaka, will produce fusion energy with a relatively small laser system. The heating laser, which is indispensable for the fast ignition, can be now realized with the help of all the high-techs used for LFEX. It is thus largely expected that a break through will be made in the research of laser fusion.

High power laser "LFEX" is one, that has been bringing together the best of Japanese optical technology, and greatly contributed to the improvement of the technical capabilities of domestic companies such as high precision polishing with the flatness of 0.1-micrometer on one-meter large diameter quartz glass material, high-strength multi-layer film, large flash lamp, high charge density high voltage capacitors, Faraday rotator using the world's first superconducting magnet for nuclear magnetic resonance imaging (MRI). Also, one-meter-class dielectric multilayer diffraction grating has been developed in "LFEX Laser" project, and is worldwide appreciated.

Diffraction grating is an optical element, that produces spectral decomposition of light by utilizing the diffraction by grating-like pattern. Its effect is the same as the prism, and people should often have the experience to decompose the sunlight into various colors. In order to obtain inexpensive gastric diffraction efficiency, the surface of the diffraction grating is generally coated with a thin film of gold or silver, but it will be less effective against strong laser light. The dielectric multilayer film is a coating with a high strength for the high intensity light to efficiently reflect intense light such as a laser. One can make a diffraction grating of high laser strength by subjecting dielectric multilayer film on the back surface of the diffraction grating. In "LFEX laser", as the last of the optical element which the laser energy is maximized, it is used to reduce a pulse one trillionth of a second (1 picosecond).

Current and electromagnetic waves flowing in a very short period.

"Congratulations to the Institute of Laser Engineering team for completing the 2000 trillion watt LFEX laser system," said Professor Robert L. McCrory, Director of the Laboratory for Laser Energetics at the University of Rochester. "This is a world-leading facility and I look forward hearing about the exciting physics results that will come from research on it over the upcoming years."

Very recently, the Institute of Laser Engineering (ILE), Osaka University- one of top-level research institutes in the world - has achieved the world's largest 2000 trillion watt output from the high power laser "LFEX", after stacking years of research and development efforts under the support of the Ministry of Education, Culture, Sports, Science and Technology (MEXT). This achievement should be highly evaluated, because it has proven the world highest standard of research infrastructure of Japan. It will open future paths in many fields of science and technology such as laser fusion, medical applications, and quantum beam generation. One of the major reasons for the success is attributed to the fact that ILE has constantly endeavored to develop various collaborations with wide range researchers among different fields. This is nothing but an evidence for the high management capabilities of ILE and Osaka University. In particular, the fast ignition approach -ILE's original and unique idea - is believed to be the very fast track to the realization of fusion energy. I have thus no doubt that they will make a break-through and further progress in this research field. 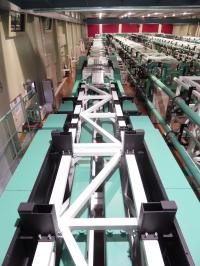