As the third-largest island in the world and the largest island in Asia, Borneo stands out as a hotspot for biodiversity, and there is no question that Borneo's many rare species are in trouble. And yet--with targeted conservation measures--there's hope, according to researchers who predict changes to the Bornean landscape over the next 65 years in the Cell Press journal Current Biology on January 22.

"Only a modest amount of additional land on Borneo--about 28,000 km2 or four percent of the island--would be needed outside of existing protected areas and reserves to safeguard many mammal species against threats from deforestation and climate change," says Matthew Struebig of the University of Kent in the United Kingdom.

As suitable habitat shifts upland, higher elevation reserves will continue to grow in importance, adds Andreas Wilting of Leibniz Institute for Zoo and Wildlife Research in Germany. The logging industry is in a position to play a major role in tropical conservation efforts, given that they manage most of the land in question.

Struebig, Wilting, and their colleagues took a novel approach to assessing Borneo's future in the new study. "Few forward-planning conservation assessments consider both the effects of climate change and land-cover change on tropical biodiversity, because land-cover change is difficult to predict reliably," Wilting explains.

The researchers overcame that hurdle by using a deforestation model to predict where forests will likely be lost over time. They also enlisted a global network of tropical mammal experts to quantify and map a suitable habitat for each species.

Based on climate projections alone, up to one in every three Bornean mammal species is expected to lose 30% or more of their habitat by the year 2080, the new report shows. With additional losses as rainforests are cut, nearly half of Borneo's mammals could see suitable habitats shrink by a third or more in the coming decades.

Their analyses show that deforestation and climate change are both expected to hit lowland forests of Borneo the hardest. While lowland forests and especially peatlands will remain important for endangered species such as the otter civet and flat-headed cat, the researchers say that higher-elevation reserves deserve special attention for mitigating the threat of climate change.

With the evidence base now in place, the researchers say they hope the findings will make an important difference to conservation efforts on the ground. The team, which includes conservation organizations and government institutions, is now presenting their portfolio to government representatives in Indonesia, Malaysia, and Brunei through the Borneo Futures initiative.

"It is these kinds of initiatives that are needed in under-resourced biodiversity hotspots to take scientific findings to key decision makers," Struebig says.

As trees are cut and climates shift, can the animals of Borneo be saved? 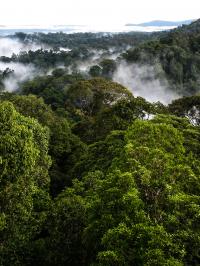