They are diligently stoking thousands of bonfires on the ground close to their crops, but the French winemakers are fighting a losing battle. An above-average warm spell at the end of March has been followed by days of extreme frost, destroying the vines with losses amounting to 90 percent above average. The image of the struggle may well be the most depressingly beautiful illustration of the complexities and unpredictability of global climate warming. It is also an agricultural disaster from Bordeaux to Champagne.

It is the loss of the Arctic sea-ice due to climate warming that has, somewhat paradoxically, been implicated with severe cold and snowy mid-latitude winters.

"Climate change doesn't always manifest in the most obvious ways. It's easy to extrapolate models to show that winters are getting warmer and to forecast a virtually snow-free future in Europe, but our most recent study shows that is too simplistic. We should beware of making broad sweeping statements about the impacts of climate change." Says professor Alun Hubbard from CAGE Center for Arctic Gas Hydrate, Environment and Climate at UiT The Arctic University of Norway.

Hubbard is the co-author of a study in Nature Geoscience examining this counter-intuitive climatic paradox: A 50% reduction in Arctic sea-ice cover has increased open-water and winter evaporation to fuel more extreme snowfall further south across Europe.

The study, led by Dr. Hanna Bailey at the University of Oulu, Finland, has more specifically found that the long-term decline of Arctic sea-ice since the late 1970s had a direct connection to one specific weather event: "Beast from the East" - the February snowfall that brought large parts of the European continent to a halt in 2018, causing £1bn a day in losses.

Researchers discovered that atmospheric vapour traveling south from the Arctic carried a unique geochemical fingerprint, revealing that its source was the warm, open-water surface of the Barents Sea, part of the Arctic Ocean between Norway, Russia, and Svalbard. They found that during the "Beast from the East", open-water conditions in the Barents Sea supplied up to 88% of the corresponding fresh snow that fell over Europe.

Climate warming is lifting the lid off the Arctic Ocean

"What we're finding is that sea-ice is effectively a lid on the ocean. And with its long-term reduction across the Arctic, we're seeing increasing amounts of moisture enter the atmosphere during winter, which directly impacts our weather further south, causing extreme heavy snowfalls. It might seem counter-intuitive, but nature is complex and what happens in the Arctic doesn't stay in the Arctic." says Bailey.

When analyzing the long-term trends from 1979 onwards, researchers found that for every square meter of winter sea-ice lost from the Barents Sea, there was a corresponding 70 kg increase in the evaporation, moisture, and snow falling over Europe.

Their findings indicate that within the next 60 years, a predicted ice-free Barents Sea will likely become a significant source of increased winter precipitation - be it rain or snow - for Europe.

"This study illustrates that the abrupt changes being witnessed across the Arctic now, really are affecting the entire planet." says professor Hubbard. 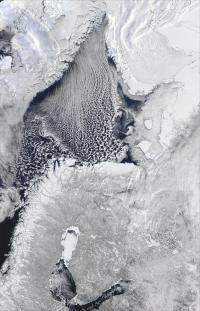 Beast from the East Nasa