Spending on energy efficiency programs funded by electric and natural gas utility customers will double by 2025 to about $9.5 billion per year, according to projections published today by researchers at Lawrence Berkeley National Laboratory (Berkeley Lab).

These funds, which come from a charge on utility bills, historically constitute the nation's largest source of spending on programs to foster the adoption of more efficient products and buildings. According to the Berkeley Lab report, energy efficiency programs funded by utility customers are projected to continue expanding beyond the traditional bastions of energy efficiency in the Northeast and West.

The projected growth in program spending is driven by policies in a number of states requiring that utilities obtain all cost-effective energy efficiency savings. Another driver is energy efficiency resource standards, which require electric utilities to meet minimum energy savings goals each year.

"In addition, we see some utilities turning to energy efficiency as part of their strategy for reliable delivery of electricity as older coal-fired generators are retired," said staff scientist Charles A. Goldman, a co-author of the study and head of the laboratory's energy analysis and environmental impacts department.

For the analysis, the Berkeley Lab team developed low, medium, and high scenarios for program spending and savings, intended to reflect a range of potential outcomes under the current policy environment – that is, without considering possible major new policy developments. The analysis was based on a detailed review of all relevant state policies and legislation, regulatory filings and decisions, and utility integrated resource and demand-side management plans. The researchers refined the scenarios through extensive interviews with regional and national energy efficiency experts, efficiency program administrators, regulatory staff, and other industry actors.

Galen Barbose, the lead author of the report, explained that "this study is intended to provide a detailed, bottom-up analysis of state policies and to capture the market context in which programs operate."

Total U.S. spending on electric and gas efficiency programs (excluding load management programs) is projected to grow in all scenarios examined, ranging from $6.5 billion to $15.6 billion in 2025, with a mid-range projection of $9.5 billion under a scenario in which states are fairly successful in ramping up their programs to meet state energy-savings policies now on the books. This compares to total spending of $4.8 billion in 2010. As discussed within the report, the range in potential spending trajectories reflects a number of key challenges and significant uncertainties in market and policy drivers, including concerns about utility rate impacts from energy efficiency programs, the timing and pace of the economic recovery, the long-term trend in natural gas prices, and the impact of recent and possible future changes to federal and state minimum efficiency standards for appliances and building codes.

Significantly, electricity savings at that level in 2025 could offset the majority of load growth forecasted through that year in the Energy Information Administration (EIA)'s most recent reference case forecast for electricity usage. This assumes that the EIA forecast correctly estimates savings from future customer-funded energy efficiency programs.

"So far, only a few very aggressive states have come close to offsetting growth in electricity needs through efficiency," Goldman said. "Our finding that, in aggregate, U.S. energy efficiency programs could offset a significant portion of projected load growth in the electricity sector over the next decade is subject to some uncertainties but striking nonetheless."

In the current policy and market environment, spending on gas energy efficiency programs is projected to continue its rise in the near term but flatten from 2015 onward, reflecting the influence of low natural gas prices and new state and federal equipment efficiency standards.

The report, entitled The Future of Utility Customer-Funded Energy Efficiency Programs in the United States: Projected Spending and Savings to 2025, was funded by the U.S. Department of Energy's Office of Electricity Delivery and Energy Reliability and can be downloaded at: http://emp.lbl.gov/sites/all/files/lbnl-5803e.pdf

A Powerpoint briefing summarizing key findings from the report can be downloaded at: http://emp.lbl.gov/sites/all/files/lbnl-5803e-brief.pdf

An abbreviated version of the report, excluding the technical appendix, appears this month in Energy Efficiency Journal. http://www.springerlink.com/openurl.asp?genre=article&id=doi:10.1007/s12053-012-9187-1

Doubling down on energy efficiency 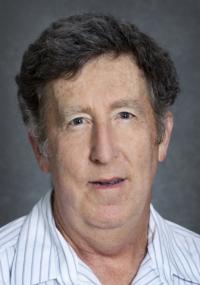 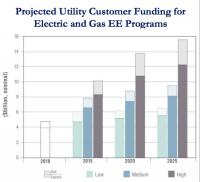