Kaare Hartvig Jensen and his colleagues at DTU Physics had repeated experiences where the small glass pipettes they use to extract fluid from plant cells broke upon contact with the cell wall. This annoyed the researchers and aroused their interest in similar pointed objects in nature that do not break when used. That includes thorns on plants such as cacti and nettles or the stings and spines of many insects, algae, hedgehogs, and other animals.

The idea of seeking inspiration in nature is not new to Kaare Hartvig Jensen, who belongs to a growing group of biomimetics researchers. They focus on exploring nature design to find inspiration for technical innovations related to, for example, tools and medical equipment.

Based on a wide range of experiments

To acquire more knowledge on the subject, Kaare Hartvig Jensen and his colleagues conducted model experiments and collected data from more than 200 species, examining the design of various pointed objects in animals and plants. Their field of study was broad and included pointed parts of plants or animals used for very different purposes, for example for sticking to a surface, ingesting nourishment, or defence. The analysis furthermore included needles or stings on animals and plants which are made of vastly different materials and sizes, ranging from the smallest viruses and algae spikes, measuring just 50 nanometres, to the world's longest pointed part of an animal, the 2.5 metre narwhal tusk.

The researchers also included the design of man-made pointed objects such as nails, syringe needles, and weapons (ancient spears and lances) up to six metres long.

The large database allowed the researchers to identify how nature's pointy tools are designed to be both strong enough to penetrate human or animal skin, for example, and hard enough to ensure the tip does not break when coming into contact with the skin.

"Our results showed that there is a clear correlation between the length of a needle or sting and its diameter, both close to the tip and where it attaches to the plant or animal. In this way, both the necessary strength and elasticity of the tip can be ensured, whether on a nettle or a mosquito" says Kaare Hartvig Jensen.

"At the same time, it's clear that the pointy tools of nature are on the very edge of what is physically possible. And it's also clear that the designs are very similar, regardless of whether we're looking at the nanoscale spikes of a virus or a swordfish's 1.5 metre bill," says Kaare Hartvig Jensen.

The findings from the new study have recently been published in the respected scientific journal Nature Physics.

"This new knowledge of how to calculate the optimal design of a pointed object can in future be used to design, e.g., syringe needles to optimize the allocation of medication. Or in designing nails, enabling a reduction of material consumption without losing the necessary stability," says Kaare Hartvig Jensen.

The researchers themselves have also used the results to redesign their glass pipettes so they no longer experience breakage when extracting fluid from plant cells.

Elasticity key to plants and animals' ability to sting 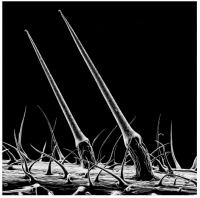